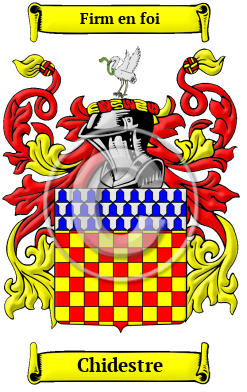 The name Chidestre arrived in England after the Norman Conquest of 1066. The Chidestre family lived in the city and market-town of Chichester in the hundred of Box and Stockbridge, rape of Chichester.

"This city, which is of very remote antiquity, derives the latter part of its name from its having been a Roman station, supposed to be Regnum; and the former part, from its subsequent occupation by Cissa, about the close of the fifth century. About the year 47, Flavius Vespasian, who took possession of this portion of Britain, made the place his head-quarters, and threw up an intrenchment three miles in extent, some traces of which are still apparent. Chichester was of considerable importance; but it suffered greatly from the Danes; and, at the time of the Conquest, had declined so much, that it had scarcely a hundred houses within the walls." [1]

Early Origins of the Chidestre family

The surname Chidestre was first found in Devon where they held a family seat as Lords of the Manor of Raleigh in that shire. Conjecturally, the family name is descended from the holder of the lands of Raleigh at the time of the taking of the Domesday Book survey, a census initiated by Duke William of Normandy in 1086 after his conquest of England at Hastings in 1066 A.D.

"Eggesford [in Devon] passed by female heirs to the Coplestones and Chichesters; and Lord Chichester rebuilt the manor-house in the reign of James I. This was one of the mansions garrisoned for the King in the subsequent reign, but it was captured by Colonel Okey in December, 1645. From the Chichesters the manor came to the St. Legers" [2]

One of the first records of the name was Hilary of Chichester (c.1110-1169), a medieval Bishop of Chichester.

About the same time, Robert Chichester (d. 1156), was Bishop of Exeter, "described without any satisfactory reason as a native of Devonshire, was Dean of Salisbury when in April 1138 he was elected Bishop of Exeter." [3]

Richard of Chichester (1197-1253), also known as Richard de Wych, is an English saint (canonized 1262) and former Bishop of Chichester; his translated saint's day of 16 June has been celebrated as Sussex Day since 2007.

Early History of the Chidestre family

A multitude of spelling variations characterize Norman surnames. Many variations occurred because Old and Middle English lacked any definite spelling rules. The introduction of Norman French to England also had a pronounced effect, as did the court languages of Latin and French. Therefore, one person was often referred to by several different spellings in a single lifetime. The various spellings include Chichester, Chister, Chichestere, Chichister and others.

Outstanding amongst the family at this time was Sir John Chichester (1519-1569) English gentry from Devon, a naval captain and ardent Protestant who served as Sheriff of Devon in 1550, Knight of the Shire for Devon in 1547; and his son, Sir Arthur Chichester, 1st Baron Chichester (1563-1625), an English administrator and...
Another 51 words (4 lines of text) are included under the topic Early Chidestre Notables in all our PDF Extended History products and printed products wherever possible.

Migration of the Chidestre family to Ireland

Some of the Chidestre family moved to Ireland, but this topic is not covered in this excerpt.
Another 157 words (11 lines of text) about their life in Ireland is included in all our PDF Extended History products and printed products wherever possible.

Migration of the Chidestre family

Many English families left England, to avoid the chaos of their homeland and migrated to the many British colonies abroad. Although the conditions on the ships were extremely cramped, and some travelers arrived diseased, starving, and destitute, once in the colonies, many of the families prospered and made valuable contributions to the cultures of what would become the United States and Canada. Research into the origins of individual families in North America has revealed records of the immigration of a number of people bearing the name Chidestre or a variant listed above: James Chichester who settled in Massachusetts in 1635; Edward Chichester settled in Nevis in 1670; William Chichester settled in Virginia in 1652; J.W. Chichester settled in San Francisco Cal. in 1850..