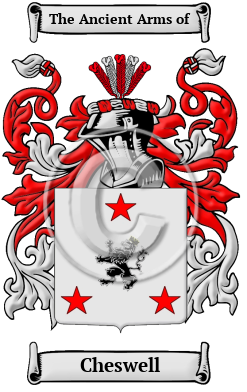 Early Origins of the Cheswell family

The surname Cheswell was first found in Essex at either Great Chishall or Little Chishall. Both parishes are in the in the union of Royston, hundred of Uttlesford. "John de Chishal or Chishull, Bishop of London, who died in the year 1279, took his name from Little Chishall." [1] Another John Chishull (John de Chishull) (d. 1180), Bishop of Essex was similarly from this area.

Early History of the Cheswell family

This web page shows only a small excerpt of our Cheswell research. Another 130 words (9 lines of text) covering the years 1510, 1600, 1545, 1455 and 1487 are included under the topic Early Cheswell History in all our PDF Extended History products and printed products wherever possible.

More information is included under the topic Early Cheswell Notables in all our PDF Extended History products and printed products wherever possible.

Cheswell migration to the United States +

Cheswell Settlers in United States in the 17th Century