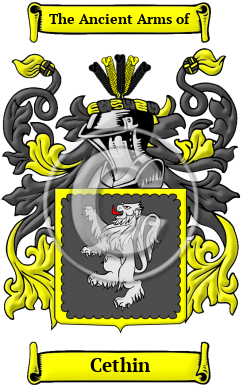 The Celtic name of Cethin was derived from the rugged landscape of Wales. This old, proud name is from the Welsh personal name Gethin. According to some experts, this forename is derived from the word "cethin," which means "dusky" or "dark."

Early Origins of the Cethin family

The surname Cethin was first found in Cheshire, where they held a family seat as Lords of the Manor near Malpas. The main stem of the family is said to be descended from David Goch, a Welsh chieftain, Lord of Penmachno of Fedwdeg. One of the oldest records of the name was Rhys Gethin (died 1405), Welsh standard bearer and a leading general in the revolt of Owain Glyndwr in which he led an army which captured several castles in South Wales; and later Ieuan Gethin ap Ieuan ap Lleision (fl. c. 1450) was a Welsh language poet and gentleman from Baglan, Glamorgan. A large number of his own poems remain in existence today.

Early History of the Cethin family

Welsh surnames are relatively few in number, but they have an inordinately large number of spelling variations. There are many factors that explain the preponderance of Welsh variants, but the earliest is found during the Middle Ages when Welsh surnames came into use. Scribes and church officials recorded names as they sounded, which often resulted in a single person's name being inconsistently recorded over his lifetime. The transliteration of Welsh names into English also accounts for many of the spelling variations: the unique Brythonic Celtic language of the Welsh had many sounds the English language was incapable of accurately reproducing. It was also common for members of a same surname to change their names slightly, in order to signify a branch loyalty within the family, a religious adherence, or even patriotic affiliations. For all of these reasons, the many spelling variations of particular Welsh names are very important. The surname Cethin has occasionally been spelled Gethin, Gethyn, Gethyns, Gethyng, Gethings, Gething, Gethinge, Getting, Gettings, Gittings, Gittens, Gittins, Gidding, Giddings, Gettins, Giddens, Giddins, Gidden, Giddens, Gettens, Gitting and many more.

Prominent amongst the family during the late Middle Ages was Rhys Gethin (died 1405), key figure in the revolt of Owain Glyndwr, standard bearer and a leading general, took part in the crucial Welsh victory at the Battle of Bryn Glas (1402), led an army which captured several castles in South Wales, killed at either the Battle of Pwll Melyn or the Battle of Grosmont in 1405. Lady Grace Gethin (1676-1697), was...
Another 71 words (5 lines of text) are included under the topic Early Cethin Notables in all our PDF Extended History products and printed products wherever possible.

Migration of the Cethin family to Ireland

Some of the Cethin family moved to Ireland, but this topic is not covered in this excerpt.
Another 74 words (5 lines of text) about their life in Ireland is included in all our PDF Extended History products and printed products wherever possible.

Migration of the Cethin family

The Welsh migration to North America in the late 19th and early 20th centuries contributed greatly to its rapid development. These migrants were in search of land, work, and freedom. Those Welsh families that survived the long ocean journey were critical to the development of new industries and factories, and to the quick settlement of land. They also added to an ever-growing rich cultural heritage. A search of the immigration and passenger lists has shown a number of people bearing the name Cethin: James, George, and Jane Giddins settled in Boston in 1635; John Giddin(g)s settled in Ipswich in 1653; Edward Giddons settled in Philadelphia in 1773. Adam, James and John Gittens arrived in New York in 1854..