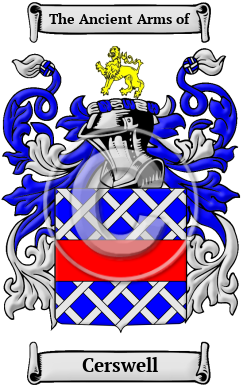 Early Origins of the Cerswell family

The surname Cerswell was first found in Renfrewshire (Gaelic: Siorrachd Rinn Friù), a historic county of Scotland, today encompassing the Council Areas of Renfrew, East Renfrewshire, and Iverclyde, in the Strathclyde region of southwestern Scotland where they were recorded as a family of great antiquity seated at Carswell in the parish of Neilston in that shire, and later branched to Carnswell in the barony of Carnwath in Lanarkshire, and to Carswell in the barony of Hassendean in Roxburghshire.

Early History of the Cerswell family

In Medieval times, spelling and translation were not nearly so highly developed as today. They were generally carried out according to the sound and intuition of the bearer. For that reason spelling variations are extremely common among early Scottish names. Cerswell has been spelled Carswell, Cresswell, Carsewell, Cressville, Carswele, Kersewell, Cressewell, Chriswell and many more.

Notable amongst the family at this time was John Carsewell ( fl. 1560-1572), Scottish Bishop of the Isles, was in his earlier years chaplain to the Earl of Argyll and rector of Kilmartin. Joseph Cresswell (1557-1623?), was an English Jesuit, born in London and entered the Society of Jesus...
Another 47 words (3 lines of text) are included under the topic Early Cerswell Notables in all our PDF Extended History products and printed products wherever possible.

Migration of the Cerswell family

Unrest, poverty, and persecution caused thousands to look for opportunity and freedom in the North American colonies. The crossing was long, overcrowded, and unsanitary, though, and came only at great expense. Many Strathclyde families settled on the east coast of North America in communities that would form the backbone of what would become the great nations of the United States and Canada. The American War of Independence caused those who remained loyal to England to move north to Canada as United Empire Loyalists. In the 20th century, Strathclyde and other Scottish families across North America began to recover their collective heritage through highland games and Clan societies. Among them: John Carswell who settled in Charles Town [Charleston], South Carolina in 1767 with his wife Anne, and his children George, Joseph, Thomas, and Rebecca.