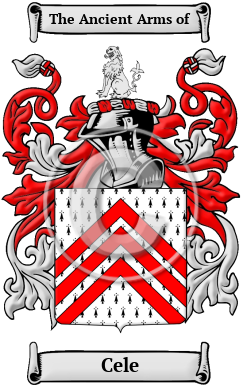 The name Cele was brought to England by the Normans when they conquered the country in 1066. The ancestors of the Cele family lived in Devon. Ancient records reveal the name Cele is derived from the Old English word saelig, meaning one who is happy and blessed.

Early Origins of the Cele family

The surname Cele was first found in Devon where they were granted lands by William the Conqueror for their assistance at the Battle of Hastings in 1066 A.D. They were Lords of the manor of Rackenford, and were conjecturally descended from Jocelyn who held the lands at the time of the taking of the Domesday Book in 1086 A.D. from Baldwin, the Sheriff. The family may have originated in Cornwall as in "John Silly, gentleman of St. Wenn, altered his name from Ceely to Silly." [1] No dates were given with the previous quote. However, we did find another note about the family in the parish of Helland, Cornwall. "Another barton called Kernick, which was for some time the residence of a family called Silly, became the property of Sir John Morshead." [2]

William, Count of Sully, also known as William the Simple (c. 1085-c. 1150) was Count of Blois and Count of Chartres from 1102 to 1107, and jure uxoris Count of Sully. William was the eldest son of Stephen-Henry, Count of Blois and Adela of Normandy, daughter of William the Conqueror. In 1104, William married Agnes of Sully, the heiress to the lordship of Sully-sur-Loire. Together they had six children including Henry de Sully (died 1189), the medieval Abbot of Fécamp and Bishop-designate of Salisbury and Archbishop-elect of York in 1140.

Over in France, Maurice de Sully (died 1196) was Bishop of Paris from 1160 until his death. He is best known for overseeing the building of Notre Dame Catherdaral.

Early History of the Cele family

This web page shows only a small excerpt of our Cele research. Another 67 words (5 lines of text) covering the years 1361, 1283, 1388, 1680, 1729 and 1718 are included under the topic Early Cele History in all our PDF Extended History products and printed products wherever possible.

The English language only became standardized in the last few centuries. For that reason, spelling variations are common among many Anglo-Norman names. The shape of the English language was frequently changed with the introduction of elements of Norman French, Latin, and other European languages; even the spelling of literate people's names were subsequently modified. Cele has been recorded under many different variations, including Silley, Silly, Cele, Sully, Silliman and others.

Outstanding amongst the family at this time was Sir John Sully (born c.1283-c.1388), of Ruxford and Iddesleigh in Devonshire, an English knight. The family were traditional lords of the manor of Iddesleigh in Devonshire. He was noted for giving evidence in Scrope v Grosvenor, one of the earliest heraldic law cases brought in England. At the time, it is claimed that his age was 105. Henry...
Another 65 words (5 lines of text) are included under the topic Early Cele Notables in all our PDF Extended History products and printed products wherever possible.

In South Africa, the name Cele is the 37th most popular surname with an estimated 102,346 people with that name. [3]

Migration of the Cele family

To escape the uncertainty of the political and religious uncertainty found in England, many English families boarded ships at great expense to sail for the colonies held by Britain. The passages were expensive, though, and the boats were unsafe, overcrowded, and ridden with disease. Those who were hardy and lucky enough to make the passage intact were rewarded with land, opportunity, and social environment less prone to religious and political persecution. Many of these families went on to be important contributors to the young nations of Canada and the United States where they settled. Celes were some of the first of the immigrants to arrive in North America: Edward Silley settled in Virginia in 1635; Sarah Silley settled in Maryland in 1737; Hugh and John Silly settled in Barbados in 1660; Thomas Silly landed in Philadelphia, Pennsylvania in 1877.