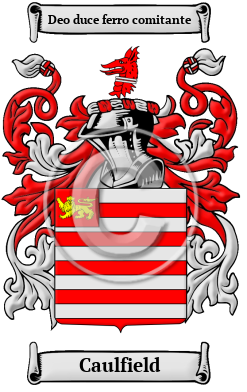 Early Origins of the Caulfield family

The surname Caulfield was first found in Fermanagh (Irish: Fear Manach) in the southwestern part of Northern Ireland, Province of Ulster, where they held a family seat from ancient times. They were directly descended from King Colla da Crioch through the Maguires, Princes of Fermanagh.

Castle Caulfield is a large ruined house in Castlecaulfield, County Tyrone. At one time, the building was three stories high with large windows and tall chimney stacks. A wooden joist from the castle eludes to the age of the building as about 1282.

The Caulfeild Coat of Arms is still seen over the entrance. Nearby, Sir Toby Caulfeild, 1st Baron Caulfeild (1565-1627) built a house on the site of an earlier O'Donnelly castle. It was burned in the Irish Rebellion of 1641, but was rebuilt in the 1660s. Today Castle Caulfield is a ruin and declared a State Care Historic Monument.

Early History of the Caulfield family

Just like the English language, the Gaelic language of Ireland was not standardized in the Middle Ages. Therefore, one's name was often recorded under several different spellings during the life of its bearer. Spelling variations revealed in the search for the origins of the Caulfield family name include Caulfeild, Caulkin, Calfkins, Cawlfield, Cawfield, MacCaul, MacCawell and many more.

In the United States, the name Caulfield is the 8,316th most popular surname with an estimated 2,487 people with that name. [2]

Caulfield migration to the United States +

Ireland became inhospitable for many native Irish families in the 19th centuries. Poverty, lack of opportunities, high rents, and discrimination forced thousands to leave the island for North America. The largest exodus of Irish settlers occurred with the Great Potato Famine of the late 1840s. For these immigrants the journey to British North America and the United States was long and dangerous and many did not live to see the shores of those new lands. Those who did make it were essential to the development of what would become two of the wealthiest and most powerful nations of the world. These Irish immigrants were not only important for peopling the new settlements and cities, they also provided the manpower needed for the many industrial and agricultural projects so essential to these growing nations. Immigration and passenger lists have documented the arrival of various people bearing the name Caulfield to North America:

Caulfield Settlers in United States in the 18th Century

Caulfield Settlers in United States in the 19th Century

Caulfield Settlers in Canada in the 18th Century

Caulfield Settlers in Canada in the 19th Century

Caulfield Settlers in Australia in the 19th Century

Caulfield Settlers in New Zealand in the 19th Century

Motto: Deo duce ferro comitante
Motto Translation: God is my guide,and my sword is my companion.