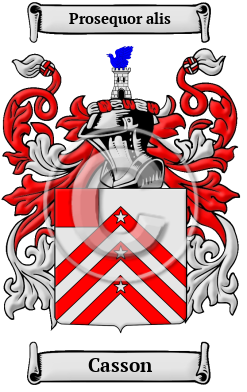 The vast movement of people that followed the Norman Conquest of England in 1066 brought the Casson family name to the British Isles. Casson comes from de Cassagne, the name of the House of the Lords of Montagu, who were a family of distinction from the province of Bearne, France. [1]

Early Origins of the Casson family

The surname Casson was first found in Hampshire, where a Ralph Cattessone was on record in 1115. Other early records include Robert Casseson in 1327 in the Subsidy Rolls of Cambridgeshire, John Catessone, on record in the Feet of Fines of Suffolk in 1366, and William Casson in the Register of the Freemen of the City of York in 1601. [2]

Early History of the Casson family

Multitudes of spelling variations are a hallmark of Anglo Norman names. Most of these names evolved in the 11th and 12th century, in the time after the Normans introduced their own Norman French language into a country where Old and Middle English had no spelling rules and the languages of the court were French and Latin. To make matters worse, medieval scribes spelled words according to sound, so names frequently appeared differently in the various documents in which they were recorded. The name was spelled Cassan, Cassane, Casson and others.

Outstanding amongst the family at this time was Stephen Hyde Cassan (1789-1841), English ecclesiastical biographer, son of Stephen Cassan, barrister, by his wife Sarah, daughter of Charles Mears, born in 1789 at Calcutta, where his father was sheriff. He was educated at Magdalen Hall, Oxford, and took his B.A. degree on 14 Jan. 1815. He received deacon's orders on 26 March following, and was ordained priest the next year. While curate of Frome...
Another 72 words (5 lines of text) are included under the topic Early Casson Notables in all our PDF Extended History products and printed products wherever possible.

In the United States, the name Casson is the 11,905th most popular surname with an estimated 2,487 people with that name. [3]

Migration of the Casson family to Ireland

Some of the Casson family moved to Ireland, but this topic is not covered in this excerpt. More information about their life in Ireland is included in all our PDF Extended History products and printed products wherever possible.

Casson migration to the United States +

Because of this political and religious unrest within English society, many people decided to immigrate to the colonies. Families left for Ireland, North America, and Australia in enormous numbers, traveling at high cost in extremely inhospitable conditions. The New World in particular was a desirable destination, but the long voyage caused many to arrive sick and starving. Those who made it, though, were welcomed by opportunities far greater than they had known at home in England. Many of these families went on to make important contributions to the emerging nations of Canada and the United States. Analysis of immigration records indicates that some of the first North American immigrants bore the name Casson or a variant listed above:

Casson Settlers in United States in the 17th Century

Casson Settlers in United States in the 19th Century

Casson Settlers in United States in the 20th Century

Casson Settlers in Canada in the 19th Century

Casson Settlers in Canada in the 20th Century

Casson Settlers in Australia in the 19th Century

Casson Settlers in West Indies in the 17th Century