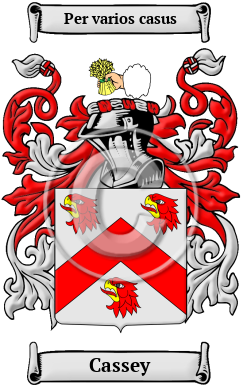 In its ancient Gaelic form, the Irish name Cassey was written O Cathasaigh, from the word "cathasach," which means watchful.

Early Origins of the Cassey family

The surname Cassey was first found in the counties of Fermanagh, Mayo, Dublin, Limerick, Cork and Roscommon. In early times, there were six unrelated septs of O Cathasaigh; the two most important were the erenagh (church steward) families of Devenish in the county of Fermanagh and the Lords of the Suaithni, in the present-day barony of Balrothery West, in County Dublin. The name has since become widely scattered. Although it remains common in County Dublin, it is now most prevalent in the southwest of Munster, with a smaller but still sizable population in north Connacht. This corresponds with the locations of the other four septs, which were found at Liscannon near Bruff in the County Limerick; near Mitchelstown in County Cork; in Clondara in County Roscommon; and in Tirawley in County Mayo, where two Casey septs were located. The Caseys of Mayo and Roscommon, like those in Fermanagh, were also notable as erenaghs. Archaeological remains indicate that Caseys were also once found near Waterford. Furthermore, a sept of MacCasey was once located at Oriel and was common in County Monaghan. However, this sept is nearly extinct today. Due to the widespread dropping of Irish prefixes under British rule and their often-erroneous resumption in the 20th century, many MacCaseys are incorrectly thought to be O'Caseys.

Early History of the Cassey family

This web page shows only a small excerpt of our Cassey research. Another 113 words (8 lines of text) covering the years 1172, 1381, 1787, 1862, 1846 and 1870 are included under the topic Early Cassey History in all our PDF Extended History products and printed products wherever possible.

Lacking standardized spellings, scribes and church officials recorded people's name according to how they sounded. This practice often led to the misleading result of one person's name being recorded under several different spellings. Numerous spelling variations of the surname Cassey are preserved in the archival documents of the period. The various spellings of the name that were found include Casey, MacCasey, O'Casey and others.

Another 39 words (3 lines of text) are included under the topic Early Cassey Notables in all our PDF Extended History products and printed products wherever possible.

Cassey migration to the United States +

Many Irish families boarded ships bound for North America in the middle of 19th century to escape the conditions of poverty and racial discrimination at that time. Although these immigrants often arrived in a destitute state, they went on to make important contributions to the emerging nations of the United States and Canada. An inquiry into many immigration and passenger lists has revealed many early immigrants to North America bearing the Cassey family name:

Cassey Settlers in United States in the 18th Century

Cassey Settlers in Australia in the 19th Century