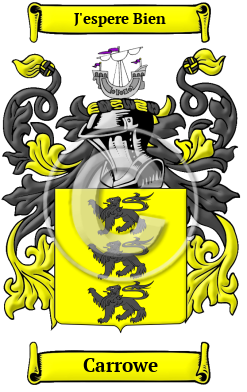 The illustrious surname Carrowe finds its origin in the rocky, sea swept coastal area of southwestern England known as Cornwall. Although surnames were fairly widespread in medieval England, people were originally known only by a single name. The process by which hereditary surnames were adopted is extremely interesting. As populations grew, people began to assume an extra name to avoid confusion and to further identify themselves. Under the Feudal System of government, surnames evolved and they often reflected life on the manor and in the field. Lords and their tenants often became known by the name of the feudal territory they owned or lived on. Unlike most Celtic peoples, who favored patronymic names, the Cornish predominantly used local surnames. This was due to the heavy political and cultural influence of the English upon the Cornish People at the time that surnames first came into use. Local surnames were derived from where a person lived, held land, or was born. While many Cornish surnames of this sort appear to be topographic surnames, which were given to people who resided near physical features such as hills, streams, churches, or types of trees, many are actually habitation surnames derived from lost or unrecorded place names. The name Carrowe is a local type of surname and the Carrowe family lived in Cornwall. This name is derived from Welsh surname Caeriw, meaning dweller at the fort on the hill.

Early Origins of the Carrowe family

The surname Carrowe was first found in Cornwall where the family first established themselves after the Conquest. The family are descended from "Gerald, son of Walter de Windsor, who lived in the reign of Henry I, which Walter was son of Otho, in the time of William the Conqueror." [2]

Early History of the Carrowe family

Notable amongst the family at this time was Hugo Carew, High Sheriff of Herefordshire in 1380; Lord George Carew, 1st Earl of Totnes (1555-1629), who served under Queen Elizabeth I during the Tudor conquest of Ireland and was appointed President of Munster; Richard Carew (1555-1620) was a Cornish translator and antiquary; Thomas Carew (1595-1639), one of the best of the Cavalier poets, courtier of King Charles I; Sir George Carew, captain of the Mary Rose, was killed in her sinking in 1545 against a French attack; Sir Richard Carew, 1st Baronet (ca. 1580-1643), of Antony in Cornwall, an English writer and...
Another 124 words (9 lines of text) are included under the topic Early Carrowe Notables in all our PDF Extended History products and printed products wherever possible.

Migration of the Carrowe family to Ireland

Some of the Carrowe family moved to Ireland, but this topic is not covered in this excerpt.
Another 209 words (15 lines of text) about their life in Ireland is included in all our PDF Extended History products and printed products wherever possible.

Migration of the Carrowe family

An investigation of the immigration and passenger lists has revealed a number of people bearing the name Carrowe: Gome Carew who settled in Maine in 1607; Mannes Carew settled in Virginia in 1653; Richard Carew with his wife Elizabeth, daughter and servants, settled in Barbados in 1680.