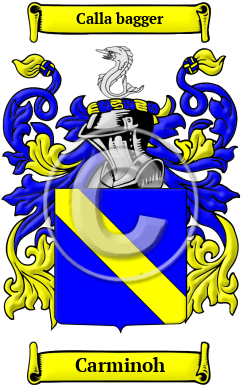 The Carminoh history begins in Cornwall, a rugged coastal region in southwestern England. Quite distinct from Devon, the adjoining county, Cornwall had its own spoken language until the late 18th century. The Carminoh history began here. The manner in which hereditary surnames arose is interesting. Local surnames were derived from where the original bearer lived, was born, or held land. Unlike most Celtic peoples, who favored patronymic names, the Cornish predominantly used local surnames. The Carminoh family originally lived in Cornwall at the manor of Carminow.

Early Origins of the Carminoh family

The surname Carminoh was first found in Cornwall where they held a family seat as Lords of the Manor of Carminow, in the parish of St.Mawgan. Family tradition has it that this family goes back to the time of King Arthur, or so it was attested in the Court of Chivalry, at the time of King Richard II when the family claimed a Coat of Arms which was also being used by the Scropes and the Grosvenors. The Carminow also attested that one of his ancestors represented King Edward the Confessor at the Court of the Duke of Normandy (1060) A.D.

The manor of "Boconnoc was the seat of the Carminows; as one of this family presented to the rectory so early as the year 1318. This was the first family that possessed this manor independently of the earldom, to which it was primarily annexed. From the Carminows it passed by an heiress to Sir Hugh Courtenay, who was slain at the fatal battle of Tewkesbury in 1471." [1]

"The manor of Merthen, on which were formerly a park and a stately mansion, belonged anciently to the Carminows, from which family it passed in marriage with a co-heiress to the Trevarthians." [1]

"The manor of Wynyanton, which formerly gave name to the parish [of Gunwalloe], belonged at a very early period to the crown. In 1235 it was the property of the Earl of Cornwall, by whom it was exchanged for another portion of property with Gervase de Hornington. Shortly afterwards it passed to the Carminows, by one of whose co-heiresses it was carried in marriage to Trevarthian." [1]

Early History of the Carminoh family

This web page shows only a small excerpt of our Carminoh research. Another 109 words (8 lines of text) are included under the topic Early Carminoh History in all our PDF Extended History products and printed products wherever possible.

Cornish surnames are characterized by a multitude of spelling variations. The frequent changes in surnames are due to the fact that the Old and Middle English languages lacked definite spelling rules. The official court languages, which were Latin and French, were also influential on the spelling of a surname. Since the spelling of surnames was rarely consistent in medieval times, and scribes and church officials recorded names as they sounded rather than adhering to any specific spelling rules, it was common to find the same individual referred to with different spellings of their surname in the ancient chronicles. Moreover, a large number of foreign names were brought into England, which accelerated and accentuated the alterations to the spelling of various surnames. Lastly, spelling variations often resulted from the linguistic differences between the people of Cornwall and the rest of England. The Cornish spoke a unique Brythonic Celtic language which was first recorded in written documents during the 10th century. However, they became increasingly Anglicized, and Cornish became extinct as a spoken language in 1777, although it has been revived by Cornish patriots in the modern era. The name has been spelled Carminow, Carmenow, Carminoe, Carminough, Carmino, Carmynow, Carminaw and many more.

More information is included under the topic Early Carminoh Notables in all our PDF Extended History products and printed products wherever possible.

Migration of the Carminoh family

Research into the origins of individual families in North America has revealed records of the immigration of a number of people bearing the name Carminoh or a variant listed above: Edward Carminaw who landed in North America in 1750.