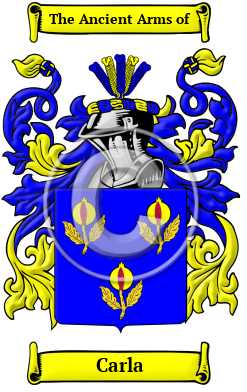 Carla is a name whose ancestors lived among the Picts, a tribe in ancient Scotland. The Carla family lived in Aberdeen (part of the modern Grampian region), where the name can be found since very early times.

Early Origins of the Carla family

The surname Carla was first found in Aberdeenshire (Gaelic: Siorrachd Obar Dheathain), a historic county, and present day Council Area of Aberdeen, located in the Grampian region of northeastern Scotland, where they held a family seat from very ancient times, some say before the Conquest in 1066.

Early History of the Carla family

The appearance of the printing press and the first dictionaries in the last few hundred years did much to standardize spelling. Prior to that time scribes spelled according to sound, a practice that resulted in many spelling variations. Carla has been spelled Carle, Carley, Carlley, Carrley, Carlie, Carleigh, Carlea, Carlee, Carrlie, Carlies, Carleys, Carleas, Carlay, Carley, Carrlay, Carrley, Carrleys, Karley and many more.

Notable amongst the Clan at this time was Hippolitus Curle (1592-1638), Scottish Jesuit, son of Gilbert Curle, Secretary to Mary Queen of Scots, by his wife, Barbara Mowbray. "He studied in the Scotch seminary at Douay, and entered the Society of Jesus at Tournai. During the second year of his noviceship his aunt, Elizabeth Curle, died at Antwerp (29 March 1619), leaving him sixty thousand florins. The bulk of this fortune he devoted to the use of the seminary at Douay, of which he is...
Another 84 words (6 lines of text) are included under the topic Early Carla Notables in all our PDF Extended History products and printed products wherever possible.

Migration of the Carla family to Ireland

Some of the Carla family moved to Ireland, but this topic is not covered in this excerpt. More information about their life in Ireland is included in all our PDF Extended History products and printed products wherever possible.

Migration of the Carla family

The expense of the crossing to the North American colonies seemed small beside the difficulties of remaining in Scotland. It was a long and hard trip, but at its end lay the reward of freedom. Some Scots remained faithful to England and called themselves United Empire Loyalists, while others fought in the American War of Independence. Much of this lost Scottish heritage has been recovered in the last century through Clan societies and other patriotic Scottish organizations. A search of immigration and passenger lists revealed many important, early immigrants to North America bearing the name of Carla: Elizabeth Carle who settled in Barbados in 1669; George Carle settled in Philadelphia, Pennsylvania in 1751; Michael Carle settled in 1736 in Philadelphia.