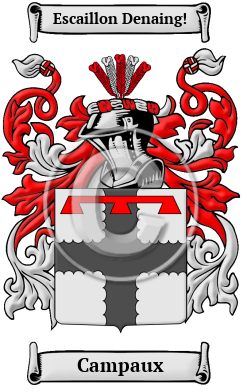 The name Campaux has a long French heritage that first began in the northern region of Normandy. The name is derived from when the family lived in Champeaux, in Normandy.

Early Origins of the Campaux family

The surname Campaux was first found in Normandy (French: Normandie), the former Duchy of Normandy, where they held a family seat. One of the first of this surname on record was William (Guillaume) de Champeaux who was Bishop of Salon-sur-Marne who is said to have died in January 1121. He was also a notable figure in philosophy in the first years of the 12th century.

Early History of the Campaux family

This web page shows only a small excerpt of our Campaux research. More information is included under the topic Early Campaux History in all our PDF Extended History products and printed products wherever possible.

History has changed the spelling of most surnames. During the early development of the French language in the Middle Ages, a person gave his version of his name, phonetically, to a scribe, a priest, or a recorder. Some variables were adopted by different branches of the family name. Hence, there spelling variations of the name Campaux, some of which include Campeau, Campeaux, Champeau, Champeaux, Champel, Champels, Champart, Campaux, Compeau and many more.

More information is included under the topic Early Campaux Notables in all our PDF Extended History products and printed products wherever possible.

Migration of the Campaux family

France was active as a cultural leader in the early 16th century. One particular area in which they lead was the exploration of the New World. The explorers, like Jacques Cartier in 1534, led the way to North America. Champlain, in 1608, made the first of twenty voyages to France to attract settlers and brought the first migrant in 1617. By 1675, there were 7000 French in Quebec, and the French Acadian presence in the Maritimes had reached 500. The French founded Lower Canada, thus becoming one of the two great founding nations of Canada. The family name Campaux has made many distinguished contributions in France and New France to the world of science, culture, religion, and education. Amongst the settlers in North America with this distinguished name Campaux were Bernard Campeau settled in Windsor in 1784; Charles Henri Basile Campeau settled in Montreal in 1763; Claude Campeau settled in St.Jean in 1732; Etienne Campeau settled in Longueuil in 1736..