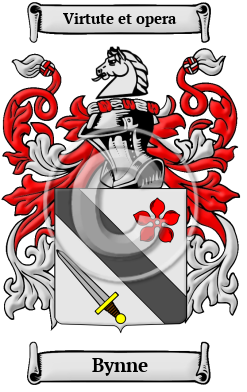 The Bynne family name comes from a place named by the Viking settlers who arrived in the shores of Scotland in the Middle Ages. The Bynne name comes from someone having lived at Bennie, near the village of Braco in the parish of Logi-Almond in Perthshire. [1]

Early Origins of the Bynne family

The surname Bynne was first found in Cumberland and Westmorland. The move of many of the family from northern England to Scotland is not documented. But we do know that "Hugh de Benne or Bennef witnessed charters by Gilchrist, earl of Angus, c. 1201-7. Hugh filius Hugonis de Benne witnessed a charter by Vmfridus de Berkelay to the Abbey of Arnbroath c. 1204-11, and as de Benne or Bennef attested a charter by William filius Bernardi." [1]

Early History of the Bynne family

Contemporary spellings of ancient Scottish names often bear little resemblance to the original recorded versions. These spelling variations result from the fact that medieval scribes spelled words and names alike according to their sounds. Bynne has been spelled Benny, Beny, Bennie, Bennee, Benne, Beney, Benney and others.

More information is included under the topic Early Bynne Notables in all our PDF Extended History products and printed products wherever possible.

Bynne migration to the United States +

The colonies on the fertile east coast of North America soon had many farms run by Scots. These hardy settlers provided a backbone for the great nations of the United States and Canada that would emerge in the next centuries. Early North American immigration records have revealed a number of people bearing the Scottish name Bynne or a variant listed above, including:

Bynne Settlers in United States in the 19th Century