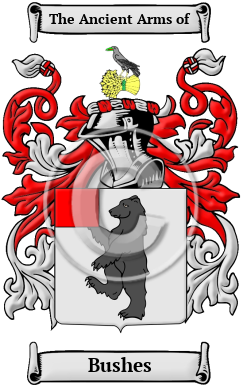 The origins of the Bushes name lie with England's ancient Anglo-Saxon culture. It comes from when the family lived in Devon, where they took their name from one of the many places named Bear, Beare, Beara, etc., found in that county. The surname is likely to be derived from the Old English word bearu, which means grove. Several early instances of that name are in the form le beare, or the bear, from the Old English bera. [1]

"A gentleman in Kent, some years since, rejoiced in the Christian and sur-(or rather un-Christian and sur-ly)names of Savage Bear (English Sum.) Although I do not recollect any other instance of this name in modern English, the nomenclature of many European countries, both personal and local, abounds with it in various forms." [2]

Early Origins of the Bushes family

The surname Bushes was first found in Devon where there are two places on the banks of Tamar called Beer-Alston and Beer-Ferris. In Dorset, place names include Beer-Hacket and Beer-Regis. [2] The earliest reference of the name was in Devon where it was listed as Bera in the Domesday Book [3]

"Two places on the banks of the Tamar, in co. Devon, are called Beer-Alston and Beer-Ferris, while two others in Dorsetshire bear the names of Beer-Hacket and Beer-Regis." [2]

In nearby Cornwall, another early listing of the family was found in the parish of St. Ervan. "Treravel, an ancient gentleman's seat, belonged in the days of Hals to George Bere or Beare, gentleman, who married Lanyon. This is now a farm house, the property of John Hicks, Esq." [4] The barton of Brynn, in the parish of Withiel, Cornwall was formerly a seat of the family of Beare, from whom it passed some time ago.

In Somerset, John de Bere and Robert atte Bere were listed there 1 Edward III (during the first year of King Edward III's reign.) [6]

Early History of the Bushes family

Before the last few hundred years, the English language had no fast system of spelling rules. For that reason, spelling variations are commonly found in early Anglo-Saxon surnames. Over the years, many variations of the name Bushes were recorded, including Beare, Bear, Beer, Bere, Beares, Bears, Beers and many more.

Distinguished members of the family include Richard de la Bere, High Sheriff of Herefordshire in 1354 and 1355. Richard Bere (d. 1524), was Abbot of Glastonbury and was installed in 1493 as the election of Thomas Wasyn having been quashed by the Bishop of Bath and Wells. "He was a great builder. Leland tells us that...
Another 55 words (4 lines of text) are included under the topic Early Bushes Notables in all our PDF Extended History products and printed products wherever possible.

Migration of the Bushes family

To escape oppression and starvation at that time, many English families left for the "open frontiers" of the New World with all its perceived opportunities. In droves people migrated to the many British colonies, those in North America in particular, paying high rates for passages in cramped, unsafe ships. Although many of the settlers did not make the long passage alive, those who did see the shores of North America perceived great opportunities before them. Many of the families that came from England went on to make essential contributions to the emerging nations of Canada and the United States. Research into various historical records revealed some of first members of the Bushes family emigrate to North America: Christopher and Mary Bere, who settled on the eastern seaboard at a very early time with their two daughters Mary and Elizabeth. They settled in Georgia in the 17th century. Walter and Ann Beare settled in Virginia in 1620.