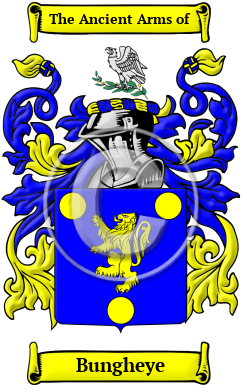 The name Bungheye was brought to England in the great wave of migration following the Norman Conquest of 1066. The Bungheye family lived in Suffolk at Bungay, a market town that dates back to the Domesday Book where it was listed as Bunghea, probably derived from the Old English personal name + inga + eg and meant "island of the family or followers of a man called Buna." [1] Another reference claims the placename was derived from the term "le-bon-eye," signifying "the good island," as it was nearly surrounded by the river Waveney, which was once a broad stream. Soon after the Norman Conquest, a castle was built, which, from its situation and the strength of its fortifications, was deemed impregnable by its possessor, Hugh Bigot, Earl of Norfolk, in the reign of Stephen; but that monarch, in the 6th of his reign, in the year 1140, came with his army and took it. Over the years Bungay Castle has fallen into ruins, but in 1934 the amateur archaeologist Leonard Cane convinced people that a restoration was needed. Today it is owned by the Bungay Castle Trust.

Early Origins of the Bungheye family

The surname Bungheye was first found in Suffolk where they held a family seat as Lords of the Manor of Bungay at the time of the Norman Conquest of England by Duke William of Normandy in 1066 A.D. Conjecturally they are descended from William de Noyers who held the lands of Bungay from the King. At the time of the taking of the Domesday Book survey in 1086 the holdings consisted of 4 Churches, 2.5 mills, 60 goats and 100 sheep. Bungay Castle was built by the Norman Earl Hugh Bigod in the 12th century.

Early History of the Bungheye family

This web page shows only a small excerpt of our Bungheye research. Another 40 words (3 lines of text) covering the years 158 and 1588 are included under the topic Early Bungheye History in all our PDF Extended History products and printed products wherever possible.

Norman surnames are characterized by a multitude of spelling variations. The frequent changes in surnames are largely due to the fact that the Old and Middle English languages lacked definite spelling rules. The introduction of Norman French to England, as well as the official court languages of Latin and French, also had pronounced influences on the spelling of surnames. Since medieval scribes and church officials recorded names as they sounded, rather than adhering to any specific spelling rules, it was common to find the same individual referred to with different spellings. The name has been spelled Bungey, Bungay, Bunker, Bunkar, Bunkey, Bunkay, Bungy and many more.

More information is included under the topic Early Bungheye Notables in all our PDF Extended History products and printed products wherever possible.

Migration of the Bungheye family

Many English families emigrated to North American colonies in order to escape the political chaos in Britain at this time. Unfortunately, many English families made the trip to the New World under extremely harsh conditions. Overcrowding on the ships caused the majority of the immigrants to arrive diseased, famished, and destitute from the long journey across the stormy Atlantic. Despite these hardships, many of the families prospered and went on to make invaluable contributions to the development of the cultures of the United States and Canada. Early North American immigration records have revealed a number of people bearing the name Bungheye or a variant listed above: James and George Bunker who settled in Boston Massachusetts in 1630; George Bunker settled in Charlestown, Massachusetts in 1630; G. and J. Bunker arrived in San Francisco Cal. in 1850.