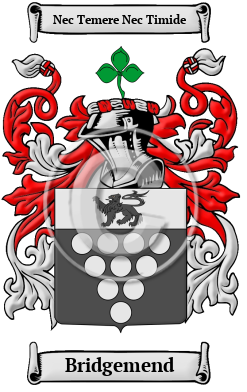 The history of the name Bridgemend dates back to the ancient Anglo-Saxon culture of Britain. It is derived from a member of the family who worked as a dweller by or "keeper of the bridge" in various parts of England.

Early Origins of the Bridgemend family

A few years later, John Bruggemon was listed in the Subsidy Rolls of Warwickshire of 1332. The same reference listed two versions of the following entry: William Breggeman and William atte Bregge. In the Yorkshire Poll Tax records of 1379, we found Johannes Brigeman. [2]

Early History of the Bridgemend family

Distinguished members of the family include Dr. John Bridgeman (1577-1652), Bishop of Chester who purchased the manor of Great Lever from the Assheton family, re-built the Hall, and resided here during some part of the Rebellion. The Bishop's eldest son, Sir Orlando Bridgeman, chief Baron of the exchequer, and afterwards lord keeper of the great seal, was the first English-man advanced to the dignity of Baronet by Charles II. after the Restoration, by the name of Sir Orlando Bridgeman, of Great Lever. Sir John Bridgeman (1568-1638) was Chief Justice of Chester; Henry Bridgeman, DD (died 1682), an Anglican clergyman, the Bishop of...
Another 102 words (7 lines of text) are included under the topic Early Bridgemend Notables in all our PDF Extended History products and printed products wherever possible.

Migration of the Bridgemend family to Ireland

Some of the Bridgemend family moved to Ireland, but this topic is not covered in this excerpt.
Another 40 words (3 lines of text) about their life in Ireland is included in all our PDF Extended History products and printed products wherever possible.

Migration of the Bridgemend family

To escape the unstable social climate in England of this time, many families boarded ships for the New World with the hope of finding land, opportunity, and greater religious and political freedom. Although the voyages were expensive, crowded, and difficult, those families that arrived often found greater opportunities and freedoms than they could have experienced at home. Many of those families went on to make significant contributions to the rapidly developing colonies in which they settled. Early North American records indicate many people bearing the name Bridgemend were among those contributors: Jacob Bridgemen who settled in Virginia in 1654; John Bridgeman settled in Virginia in 1663; Walter Bridgeman arrived in Philadelphia in 1684; Thomas Bridgman settled in Virginia in 1654.