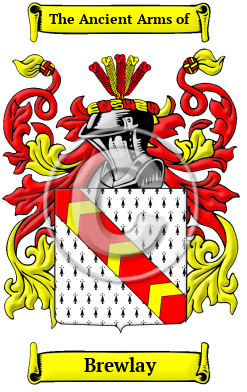 The ancient name Brewlay claim descent from "the fief of Broilly, near Valognes; one of the most ancient families of Normandy, mentioned in charters of the eleventh century, and first enrolled among the nobility in 1463." [1]

Early Origins of the Brewlay family

The surname Brewlay was first found in Bedfordshire where Osbern de Broily held lands in 1086 as listed in the Domesday Book. "The coat of the English Bruleys is in one of the windows of the parish church at Stanford, Leicestershire. Simon de Broily held lands in Warwick [2], and John de Bruilly, 1324, was summoned to a great council at Westminster." [3]

Early History of the Brewlay family

More information is included under the topic Early Brewlay Notables in all our PDF Extended History products and printed products wherever possible.

Migration of the Brewlay family