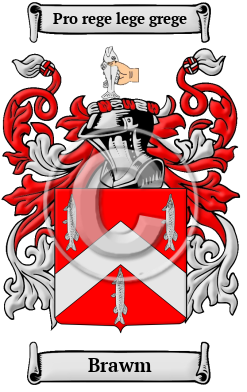 It was in the Scottish/English Borderlands that the Strathclyde-Briton people first used the ancient name Brawm. It was a name for someone who lived in Galloway in the southwest of Scotland. The Rhiged lived in what later became the northern English counties of Cumberland, Westmorland, and Lancashire.

Early Origins of the Brawm family

The surname Brawm was first found in Westmorland, at Brougham Castle a medieval building about 2 miles (3.2 km) south-east of Penrith in what is now known as Cumbria. “The De Burghams held it temp. Edward the Confessor.” [1] This castle was built on an ancient Roman fort named Brocavum and was originally at the intersection of three Roman roads.

Early History of the Brawm family

Scribes in Medieval Scotland spelled names by sound rather than any set of rules, so an enormous number of spelling variations exist in names of that era. Brawm has been spelled Brougham, Bruham, Browham and others.

Notable amongst the family at this time was Henry Brougham (1665-1698), an English divine from Scales Hall, Cumberland. He was one of the twelve children of Henry Brougham of Scales Hall, Cumberland, sheriff for the county in the 6th of William III. [2] Henry Peter Brougham...
Another 44 words (3 lines of text) are included under the topic Early Brawm Notables in all our PDF Extended History products and printed products wherever possible.

Migration of the Brawm family to Ireland

Some of the Brawm family moved to Ireland, but this topic is not covered in this excerpt.
Another 32 words (2 lines of text) about their life in Ireland is included in all our PDF Extended History products and printed products wherever possible.

Migration of the Brawm family

The number of Strathclyde Clan families sailing for North America increased steadily as the persecution continued. In the colonies, they could find not only freedom from the iron hand of the English government, but land to settle on. The American War of Independence allowed many of these settlers to prove their independence, while some chose to go to Canada as United Empire Loyalists. Scots played essential roles in the forging of both great nations. Among them: George Brougham who settled in Maryland in 1774; Mrs. Brougham arrived in San Francisco California in 1852.