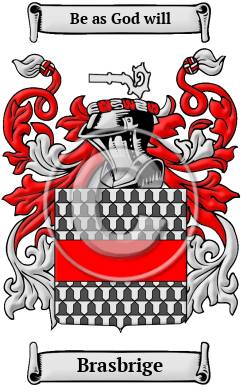 The origins of the Brasbrige name lie with England's ancient Anglo-Saxon culture. It comes from when the family lived in or near the settlement of Bracebridge in Lincolnshire.

Early Origins of the Brasbrige family

The surname Brasbrige was first found in Lincolnshire, but "in the time of King John, the venerable family of Bracebridge, originally of Bracebridge in Lincolnshire, acquired by marriage in the person of Peter de Bracebridge with Amicia, daughter of Osbert de Arden and Maud, and granddaughter of Turchill de Warwick, the manor of Kingsbury in this county, an ancient seat of the Mercian Kings, and inherited by Turchill, called the last Saxon Earl of Warwick." [1]

Early History of the Brasbrige family

This web page shows only a small excerpt of our Brasbrige research. Another 72 words (5 lines of text) covering the years 1428, 1428, 1590, 1547, 1553, 1558 and 1562 are included under the topic Early Brasbrige History in all our PDF Extended History products and printed products wherever possible.

Before the last few hundred years, the English language had no fast system of spelling rules. For that reason, spelling variations are commonly found in early Anglo-Saxon surnames. Over the years, many variations of the name Brasbrige were recorded, including Bracebridge, Bracebrigg, Brasbridge and others.

Distinguished members of the family include John Brasbrigg or Bracebrigge ( fl. 1428), who appears as a priest of the convent of Syon in 1428. "He is said to have given a large number of books to the convent, and to have written a treatise entitled 'Catholicon continens quatuor partes grammaticæ,' which, with other manuscripts belonging to Syon monastery, passed to Corpus...
Another 61 words (4 lines of text) are included under the topic Early Brasbrige Notables in all our PDF Extended History products and printed products wherever possible.

Migration of the Brasbrige family

To escape oppression and starvation at that time, many English families left for the "open frontiers" of the New World with all its perceived opportunities. In droves people migrated to the many British colonies, those in North America in particular, paying high rates for passages in cramped, unsafe ships. Although many of the settlers did not make the long passage alive, those who did see the shores of North America perceived great opportunities before them. Many of the families that came from England went on to make essential contributions to the emerging nations of Canada and the United States. Research into various historical records revealed some of first members of the Brasbrige family emigrate to North America: one of the first settlers, an unknown pioneer whose family rose to great stature in early Canada, naming the town of Bracebridge in Ontario.