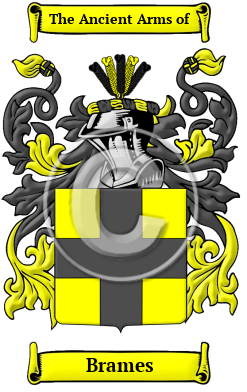 Brames is a name of ancient Anglo-Saxon origin and comes from the family once having lived in any one of a number of similarly named settlements. Bramham and Braham were found in the West Riding of Yorkshire and Brantham was found in Suffolk. Braham Hall was in Essex, as was Bream's Farm.

Early Origins of the Brames family

The surname Brames was first found in the West Riding of Yorkshire, at Braham, a parish, in the Upper division of the wapentake of Barkstone-Ash. "A battle was fought here in 1408, between Sir Thomas Rokeby, sheriff of Yorkshire, and the Earl of Northumberland, in which the earl was defeated and slain, and by which the possession of the county was secured to Henry IV. " [1]

Early History of the Brames family

Sound was what guided spelling in the essentially pre-literate Middle Ages, so one person's name was often recorded under several variations during a single lifetime. Also, before the advent of the printing press and the first dictionaries, the English language was not standardized. Therefore, spelling variations were common, even among the names of the most literate people. Known variations of the Brames family name include Braham, Braim, Bramham, Brame, Braem and others.

Notables of this surname at this time include: Johannes de Brame, a prominent 14th century landholder in Yorkshire. Robert Braham (fl. 1555), edited in 1555 'The Auncient Historic and onely trewe and syncere Cronicle of the warres betwixte the Grecians and the Troyans … translated into Englyshe verse by J. Lydgate,' [4] Sir Arnold Braemes (1602-1681), was an English merchant and politician who sat in the House of Commons in 1660; and Richard Brind (died 1718), was an English organist and composer, Organist and Master of the Choristers of St Paul's Cathedral (1707-1718.) John Braham was left an orphan at an early age, and...
Another 121 words (9 lines of text) are included under the topic Early Brames Notables in all our PDF Extended History products and printed products wherever possible.

Brames migration to the United States +

For political, religious, and economic reasons, thousands of English families boarded ships for Ireland, Canada, the America colonies, and many of smaller tropical colonies in the hope of finding better lives abroad. Although the passage on the cramped, dank ships caused many to arrive in the New World diseased and starving, those families that survived the trip often went on to make valuable contributions to those new societies to which they arrived. Early immigrants bearing the Brames surname or a spelling variation of the name include:

Brames Settlers in United States in the 19th Century