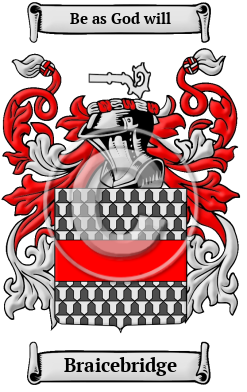 The name Braicebridge is of Anglo-Saxon origin and came from when the family lived in or near the settlement of Bracebridge in Lincolnshire.

Early Origins of the Braicebridge family

The surname Braicebridge was first found in Lincolnshire, but "in the time of King John, the venerable family of Bracebridge, originally of Bracebridge in Lincolnshire, acquired by marriage in the person of Peter de Bracebridge with Amicia, daughter of Osbert de Arden and Maud, and granddaughter of Turchill de Warwick, the manor of Kingsbury in this county, an ancient seat of the Mercian Kings, and inherited by Turchill, called the last Saxon Earl of Warwick." [1]

Early History of the Braicebridge family

This web page shows only a small excerpt of our Braicebridge research. Another 72 words (5 lines of text) covering the years 1428, 1428, 1590, 1547, 1553, 1558 and 1562 are included under the topic Early Braicebridge History in all our PDF Extended History products and printed products wherever possible.

It is only in the last few hundred years that the English language has been standardized. For that reason, early Anglo-Saxon surnames like Braicebridge are characterized by many spelling variations. As the English language changed and incorporated elements of other European languages, even literate people changed the spelling of their names. Scribes and monks in the Middle Ages spelled names they sounded, so it is common to find several variations that refer to a single person. The variations of the name Braicebridge include: Bracebridge, Bracebrigg, Brasbridge and others.

Distinguished members of the family include John Brasbrigg or Bracebrigge ( fl. 1428), who appears as a priest of the convent of Syon in 1428. "He is said to have given a large number of books to the convent, and to have written a treatise entitled 'Catholicon continens quatuor partes grammaticæ,' which, with other manuscripts belonging to Syon monastery, passed to Corpus...
Another 61 words (4 lines of text) are included under the topic Early Braicebridge Notables in all our PDF Extended History products and printed products wherever possible.

Migration of the Braicebridge family

Many English families tired of political and religious strife left Britain for the new colonies in North America. Although the trip itself offered no relief - conditions on the ships were extremely cramped, and many travelers arrived diseased, starving, and destitute - these immigrants believed the opportunities that awaited them were worth the risks. Once in the colonies, many of the families did indeed prosper and, in turn, made significant contributions to the culture and economies of the growing colonies. An inquiry into the early roots of North American families has revealed a number of immigrants bearing the name Braicebridge or a variant listed above: one of the first settlers, an unknown pioneer whose family rose to great stature in early Canada, naming the town of Bracebridge in Ontario.