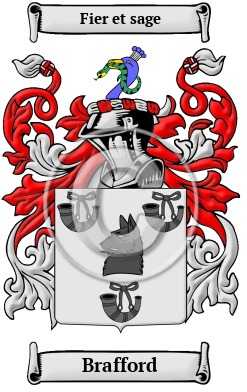 The name Brafford belongs to the early history of Britain, it's origins lie with the Anglo-Saxons. It is a product of their having lived in or near one of the many places called Bradford in England, which were found in Wiltshire, Dorset, Somerset, Devon, Northumberland, and the West Riding of Yorkshire. The surname Brafford literally means broad ford.

One source claims that the family came from "a town on the Avon, in Wiltshire, England, whence the surname is derived, and which signifies the broad ford, there being at that place a ford across the Avon." [1]

Early Origins of the Brafford family

The surname Brafford was first found in the West Riding of Yorkshire at Bradford, a borough, market-town, and parish, and the head of a union, in the wapentake of Morley. "This place during the heptarchy formed part of the extensive parish of Dewsbury, from which it appears to have been separated soon after the Conquest. The manor of Bradford, which in the Domesday Survey is described as a barren waste, was given to Ilbert de Lacy, who attended the Conqueror from Normandy, and fought under his standard at the battle of Hastings. Ilbert had 150 other manors in the county, which he formed into a seigniory, called the Honour of Pontefract." [2]

While it is generally thought the family hailed from Yorkshire, we must look to Northumberland for the first recording of the family. For it is there that Hodgson's History of Northumberland lists Alexander de Bradeford in 1197.

Ironically, the Yorkshire Poll Tax Rolls of 1379 had only one listing of the family there at that time: Johannes de Bradeford. [3]

Early History of the Brafford family

Until the dictionary, an invention of only the last few hundred years, the English language lacked any comprehensive system of spelling rules. Consequently, spelling variations in names are frequently found in early Anglo-Saxon and later Anglo-Norman documents. One person's name was often spelled several different ways over a lifetime. The recorded variations of Brafford include Bradford, Bradeford, Braidford, Bradforde and others.

Notables of the family at this time include John Bradford (1510?-1555), English Protestant martyr, born of gentle parents about 1510 in the parish of Manchester. "A local tradition claims him as a native of the chapelry of Blackley. On his way to the stake, he proclaimed ' England, England, repent thee of thy sins, repent thee of thy sins. Beware of idolatry, beware of false antichrists; take heed they do not deceive you.' " [4] William Bradford (c.1590-c.1657), was an English Separatist leader in Leiden, Holland and in Plymouth Colony. He was a signatory to the Mayflower Compact; and his son, Major William...
Another 126 words (9 lines of text) are included under the topic Early Brafford Notables in all our PDF Extended History products and printed products wherever possible.

In the United States, the name Brafford is the 14,681st most popular surname with an estimated 2,487 people with that name. [5]

Migration of the Brafford family to Ireland

Some of the Brafford family moved to Ireland, but this topic is not covered in this excerpt. More information about their life in Ireland is included in all our PDF Extended History products and printed products wherever possible.

Migration of the Brafford family

Thousands of English families boarded ships sailing to the New World in the hope of escaping the unrest found in England at this time. Although the search for opportunity and freedom from persecution abroad took the lives of many because of the cramped conditions and unsanitary nature of the vessels, the opportunity perceived in the growing colonies of North America beckoned. Many of the settlers who survived the journey went on to make important contributions to the transplanted cultures of their adopted countries. The Brafford were among these contributors, for they have been located in early North American records: William Bradford of Yorkshire who arrived at Plymouth in 1621, aboard the Mayflower and, on the death of John Carver in 1621, was chosen leader of the Pilgrims, 2nd Governor of the Plymouth colony. His wife Dorothy died at sea, en-route to the Colony. Other settlers include: Henery Bradford, who came to Virginia in 1625.