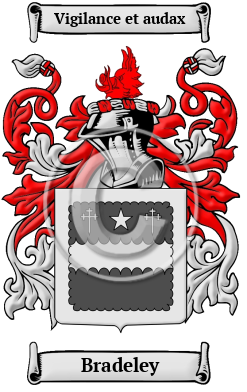 The Anglo-Saxon name Bradeley comes from when the family resided in Lincolnshire, where they held estates in the village and parish of Bradley, and from which they derived their family name. The name refers to the local "broad ley" meaning "broad meadow" and for this there are many, many parishes, townships, hamlets with this name throughout England. [1] However, the first record of the name appears in the Poll Tax Records of Lincolnshire where William de Bradelai was listed in 1170. [2]

Early Origins of the Bradeley family

The surname Bradeley was first found in Lincolnshire. However, there are at least fifteen parishes and towns that have "Bradley" as part of their name throughout Britain. [1] Most are very small, but three of them date back to the Domesday Book of 1086: Bradley, Derbyshire (Braidelei); Bradley, Maiden Wiltshire (Bradelie) and Bradley in the Moors, Staffordshire (Bretlei.) [3] A reference to the family in the township of Wilpshire in Lancashire was also found. "This place appears to have been the property of the Braddylls, and of the monks of Whalley." [4]

Early spellings of the family were very different than those in use today as seen by early entries in the Hundredorum Rolls of 1273: Robert de Bradeleye, Cambridgeshire; and Brice de Bradeleghe, Somerset. [5]

Further to the north in Scotland, the family hails from "the lands of Braidlie in the barony of Hawick, Roxburghshire [where] John de Bradely rendered homage at Berwick in 1291 and William de Bradeleye of the county of Roxburghe rendered homage in 1296. The seal of William is a curious one, bearing a tree supported by two hares, the dexter one beating a cymbal or drum, the sinister playing a pipe; bird in top, a dog coiled at base, and legend S' Will'i de Bradeley." [7]

Early History of the Bradeley family

Before English spelling was standardized a few hundred years ago, spelling variations of names were a common occurrence. Elements of Latin, French and other languages became incorporated into English through the Middle Ages, and name spellings changed even among the literate. The variations of the surname Bradeley include Bradley, Bradlie, Bradleigh, Bradly, Bradeley and others.

Notables of this surname at this time include: Sir Francis Bradley; and Thomas Bradley (ca.1596-1673), English chaplain to George Villiers, 1st Duke of Buckingham and later Chaplain to King Charles I (1628.) "He became a battler of Exeter College, Oxford, in 1616, and proceeded B.A. on 21 July 1620. He was chaplain to the Duke of Buckingham for several years, and accompanied him in the expedition to Rochelle and the Isle of Rhé in 1627. After Buckingham's murder in the following year he became chaplain to Charles I, and on 16 June 1629 a captain in the expedition...
Another 98 words (7 lines of text) are included under the topic Early Bradeley Notables in all our PDF Extended History products and printed products wherever possible.

Migration of the Bradeley family to Ireland

Some of the Bradeley family moved to Ireland, but this topic is not covered in this excerpt.
Another 119 words (8 lines of text) about their life in Ireland is included in all our PDF Extended History products and printed products wherever possible.

Bradeley Settlers in Australia in the 19th Century