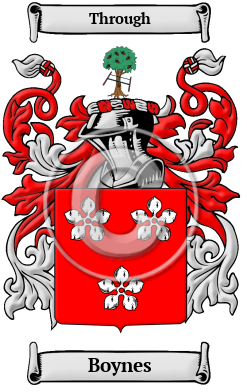 The annals of Scottish history reveal that Boynes was first used as a name by descendants of the Pictish tribe of ancient Scotland. The Boynes family lived in the lands of Boyne, near Portsoy in Banffshire since very early times. Translating from the Gaelic, the name means dweller by the river Boyne.

Early Origins of the Boynes family

The surname Boynes was first found in Banffshire (Gaelic: Siorrachd Bhanbh), former Scottish county located in the northeasterly Grampian region of Scotland, now of divided between the Council Areas of Moray and Aberdeenshire, where they held a family seat in the ancient thanedom of Boyne near Portsoy in that shire.

Early History of the Boynes family

During the Middle Ages, there was no basic set of rules and scribes wrote according to sound. The correct spelling of Scottish names were further compromised after many haphazard translations from Gaelic to English and back. Spelling variations of the name Boynes include Boyne, Boyn, Boynd and others.

More information is included under the topic Early Boynes Notables in all our PDF Extended History products and printed products wherever possible.

Migration of the Boynes family to Ireland

Some of the Boynes family moved to Ireland, but this topic is not covered in this excerpt.
Another 32 words (2 lines of text) about their life in Ireland is included in all our PDF Extended History products and printed products wherever possible.

Boynes Settlers in Australia in the 19th Century