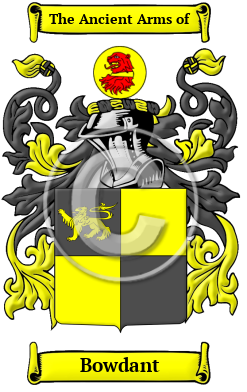 The Bowdant surname is derived from one of several places names; such as Bowden in Derbyshire and Bowdon in Cheshire. The place names are thought to derive from the Old English words "boga," or "bow" and "dùn," or "hill;" thus, a curved hill.

Early Origins of the Bowdant family

Early History of the Bowdant family

Distinguished members of the family include Samuel Bowden (fl. 1733-1761), a physician at Frome, Somersetshire, the author of two volumes of poems published 1733-1735. "Neither the date of his birth nor that of his death has been ascertained, though it appears from the 'Gentleman's Magazine,' to which he was an occasional contributor, that he was living in 1761, while a passing mention of him in 1778 is in the past tense. The writer adds...
Another 73 words (5 lines of text) are included under the topic Early Bowdant Notables in all our PDF Extended History products and printed products wherever possible.

Migration of the Bowdant family to Ireland

Some of the Bowdant family moved to Ireland, but this topic is not covered in this excerpt.
Another 61 words (4 lines of text) about their life in Ireland is included in all our PDF Extended History products and printed products wherever possible.

Migration of the Bowdant family