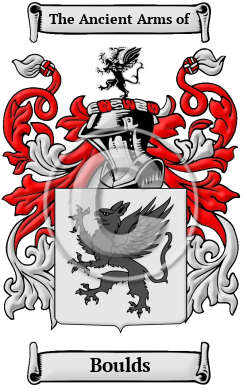 Early Origins of the Boulds family

The surname Boulds was first found in Lancashire. One branch of the family later held estates at Barkisland in the West Riding of Yorkshire.

"Barkisland Hall, the ancient seat of the Gledhill family, is a stately mansion in the old English style of domestic architecture, and has long been the property of the Bolds of Bold Hall, Lancashire." [1] Bould is a hamlet in Idbury civil parish, Oxfordshire.

Moving over to Whiston, again in Lancashire, the "Bolds held the manor in Henry VIII.'s reign, from which time its descent is not distinctly traced. " [1]

Early History of the Boulds family

Sound was what guided spelling in the essentially pre-literate Middle Ages, so one person's name was often recorded under several variations during a single lifetime. Also, before the advent of the printing press and the first dictionaries, the English language was not standardized. Therefore, spelling variations were common, even among the names of the most literate people. Known variations of the Boulds family name include Bold, Bolde, Bould, Bolt and others.

Notables of this surname at this time include: William Boolde (fl. 1455), English topographer and historian, said by Tanner (on the authority of a manuscript at Corpus Christi College, Cambridge) to have entered the monastery of Christ Church, Canterbury, on Lady Day, 1443. [2] Henry Bould (or Bolde) (born c. 1602), was a Welsh academic at the University of Oxford in the 17th century; and Arthur Bold (c 1604-1677), was an English lawyer and politician who sat in the House of Commons from 1660 to 1677. Henry Bold (1627-1683), was a poetical writer and a descendant of the ancient Lancashire family of Bold...
Another 101 words (7 lines of text) are included under the topic Early Boulds Notables in all our PDF Extended History products and printed products wherever possible.

Migration of the Boulds family

For political, religious, and economic reasons, thousands of English families boarded ships for Ireland, Canada, the America colonies, and many of smaller tropical colonies in the hope of finding better lives abroad. Although the passage on the cramped, dank ships caused many to arrive in the New World diseased and starving, those families that survived the trip often went on to make valuable contributions to those new societies to which they arrived. Early immigrants bearing the Boulds surname or a spelling variation of the name include: Margaret Bold who settled in Virginia in 1635; Andrew Bold arrived in Philadelphia in 1865; F.W. Bold settled in Texas in 1847.