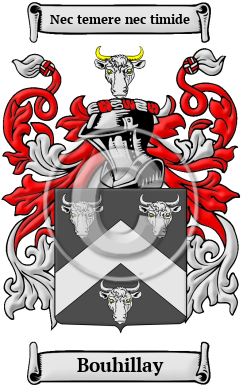 The name Bouhillay is of Anglo-Saxon origin and came from when the family lived in any of the places named Buckley, or Buckleigh, in England. Bouhillay is a local surname, which belongs to the category of hereditary surnames. The name may derive from the Old English "bok lee," meaning meadow, or field. The likely meaning of the name was "clearing in a beech wood" (with boc meaning beech tree and ley meaning wood, glade or clearing). The name could also have been construed from "bucc" meaning a buck or deer; or from the Welsh "bwlch y clai," meaning clay hole. [1]

Early Origins of the Bouhillay family

The surname Bouhillay was first found in Cheshire where Buckley was an Anglo-Saxon local, with some of its houses later recorded in the Domesday Book. The first documented evidence of its existence dates from 1294 when it was described as the pasturage of the Manor of Ewloe, spelled as "Bokkeley". [2]

Early History of the Bouhillay family

It is only in the last few hundred years that the English language has been standardized. For that reason, early Anglo-Saxon surnames like Bouhillay are characterized by many spelling variations. As the English language changed and incorporated elements of other European languages, even literate people changed the spelling of their names. Scribes and monks in the Middle Ages spelled names they sounded, so it is common to find several variations that refer to a single person. The variations of the name Bouhillay include: Buckley, Bucklie, Buckly, Bulkely, Bulkley, Bulkelly, Boukley, Bulkaly, Bulkly, Bulklay and many more.

Notables of the family at this time include William Buckley (d. 1570?), an English mathematician, a native of Lichfield, educated at Eton, whence he was elected to a scholarship at King's College, Cambridge, in 1537. Robert or Sigebert Buckley (1517-1610), was a Benedictine monk who was professed at Westminster in Queen Mary's reign. "He was imprisoned on refusing to take the oath of supremacy, and remained in captivity during the whole of Elizabeth's...
Another 71 words (5 lines of text) are included under the topic Early Bouhillay Notables in all our PDF Extended History products and printed products wherever possible.

Migration of the Bouhillay family to Ireland

Some of the Bouhillay family moved to Ireland, but this topic is not covered in this excerpt.
Another 198 words (14 lines of text) about their life in Ireland is included in all our PDF Extended History products and printed products wherever possible.

Migration of the Bouhillay family

Many English families tired of political and religious strife left Britain for the new colonies in North America. Although the trip itself offered no relief - conditions on the ships were extremely cramped, and many travelers arrived diseased, starving, and destitute - these immigrants believed the opportunities that awaited them were worth the risks. Once in the colonies, many of the families did indeed prosper and, in turn, made significant contributions to the culture and economies of the growing colonies. An inquiry into the early roots of North American families has revealed a number of immigrants bearing the name Bouhillay or a variant listed above: Daniel Buckley settled in New England in 1635; Humphrey Buckley settled in Virginia in 1635; Luce Buckley settled in Barbados in 1660; John Buckley settled in Pennsylvania in 1682.