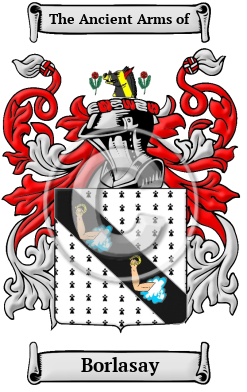 Early Origins of the Borlasay family

The surname Borlasay was first found in Cornwall where they held a family seat as Lords of the Manor of Borlase. Cornwall was a land set apart, a land of mystique and quaint customs, more strongly related to Brittany and Wales than to England. It was not until the 10th century that they submitted to the Saxon rule of England. Since then, their influence has moved east into Devon, Somerset and Dorset. Some say that the first settlers was a man from Bordeaux who settled at Borlase.

The family "descended, it is said, from a Norman family, who settled in the parish of St. Wenn, Cornwall, where they adopted the Cornish name of their place of residence (Borlase's MSS.) Pendeen, near St. Just, became their chief abode about the middle of the seventeenth century." [1]

"Castle Horneck, which signifies the iron castle, is situated, according to Norden, on the site of "an ancient ruined castle." It stands on a mount near Penzance, and appears to have been in former times a place of some importance. Castle Horneck was for several generations a seat of the family of Levelis; but it has been for about a century in the Borlase family; and it is now the property of Mr. Samuel Borlase, a minor, son of the late John Borlase, Esq." [2]

Early History of the Borlasay family

Migration of the Borlasay family to Ireland

Some of the Borlasay family moved to Ireland, but this topic is not covered in this excerpt.
Another 76 words (5 lines of text) about their life in Ireland is included in all our PDF Extended History products and printed products wherever possible.

Migration of the Borlasay family