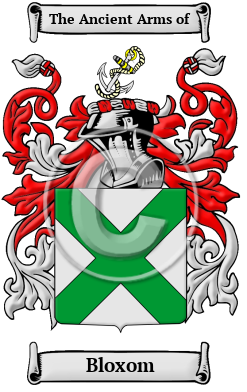 The Bloxom surname is derived from a place name, such as Bloxham in Oxfordshire and Bloxholm in Lincolnshire, both of which are recorded in Domesday Book.

Early Origins of the Bloxom family

Another early record of the family was John Bloxham (d. 1334), a Carmelite, educated at Oxford. "He entered the Carmelite community at Chester, and finally rose to be provincial of the order in England. He was in high favour with Edward II and Edward III, by both of whom he was employed in important missions in Scotland and Ireland. He was energetic in promoting the interests of his order and in reforming abuses, which he found during his tours of inspection, both in Scotland and Ireland, as well as in England. He died at Oxford about the year 1334, and was buried there. " [3]

Early History of the Bloxom family

This web page shows only a small excerpt of our Bloxom research. Another 118 words (8 lines of text) covering the years 1621, 1712, 1725, 1779, 1387 and 1375 are included under the topic Early Bloxom History in all our PDF Extended History products and printed products wherever possible.

Bloxom has been spelled many different ways. Before English spelling became standardized over the last few hundred years, spelling variations in names were a common occurrence. As the English language changed in the Middle Ages, absorbing pieces of Latin and French, as well as other languages, the spelling of people's names also changed considerably, even over a single lifetime. Many variations of the name Bloxom have been found, including Blossom, Blossome, Bloxam, Bloxham, Bloxsome, Blossun, Bloyan, Bloxholmedax, Bloxen and many more.

Another 45 words (3 lines of text) are included under the topic Early Bloxom Notables in all our PDF Extended History products and printed products wherever possible.

Migration of the Bloxom family to Ireland

Some of the Bloxom family moved to Ireland, but this topic is not covered in this excerpt. More information about their life in Ireland is included in all our PDF Extended History products and printed products wherever possible.

Migration of the Bloxom family

In an attempt to escape the chaos experienced in England, many English families boarded overcrowded and diseased ships sailing for the shores of North America and other British colonies. Those families hardy enough, and lucky enough, to make the passage intact were rewarded with land and a social environment less prone to religious and political persecution. Many of these families became important contributors to the young colonies in which they settled. Early immigration and passenger lists have documented some of the first Bloxoms to arrive on North American shores: Joseph Bloxham who settled on the Potomac in 1729; John Bloxam settled in New England in 1742; Nicholas Bloxam settled in Barbados in 1635; Anne Blossom settled in Plymouth, Massachusetts in 1629.