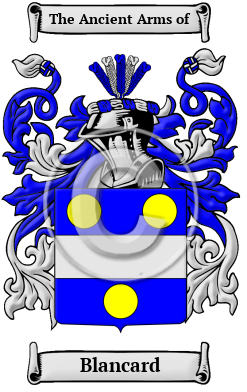 Early Origins of the Blancard family

The surname Blancard was first found in Normandy (French: Normandie), the former Duchy of Normandy, where they held a family seat in the Seigniory of Blanchardière in the department of l'Orne in the arrondisement of Domfront.

This widely dispersed and distinguished family also branched to Limousin, Bourgogne, Lorraine, and Lyonnais. Alain Blanchard was a defender of Rouen in 1418, and was hanged by the English after they took the city. A distinguished contribution by the family was made by Jacques Blanchard, notable painter of the seventeenth century. Jean Pierre Blanchard was a balloonist of the eighteenth century. François Blanchard, 1753-1809, made the first jump with a parachute in 1785.

François Blanchard, born in 1636, son of Jean and Marguerite (née Couillard), was a French gardener that travelled from Saint-Malo, located in the region of Brittany, to New France in the 17th century. He married Madeleine Boucher, daughter of Jacques and Anne (née Jocobin), in Quebec on 20th October 1665. [1]

Early History of the Blancard family

Notable amongst the family in this period was Alain Blanchard (executed in Rouen in 1419), commander of the crossbowmen of Rouen during the Hundred Years' War. His habit of hanging English captives from the walls of the city incurred the wrath of the English and was subsequently executed when the city fell. Blanchard became a heroic figure in French literature and was the hero of a tragedy by Antoine Viellard presented in 1793 and by Alexandre Dupias, in 1826. Others...
Another 80 words (6 lines of text) are included under the topic Early Blancard Notables in all our PDF Extended History products and printed products wherever possible.

Blancard migration to the United States +

Blancard Settlers in United States in the 18th Century

Blancard Settlers in United States in the 19th Century