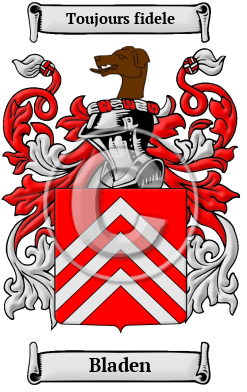 The Anglo-Saxon name Bladen comes from when the family resided in Bladon, a parish, in the union of Woodstock, hundred of Wootton, in Oxfordshire. [1] [2]

Early Origins of the Bladen family

The surname Bladen was first found in Oxfordshire, where the Hundredorum Rolls of 1273 included some of the first records of the family. Walter de Bladone, Agnes de Bladene and Hugh de Bladene were all listed in the rolls as holding lands there at that time. [3]

Early History of the Bladen family

Before English spelling was standardized a few hundred years ago, spelling variations of names were a common occurrence. Elements of Latin, French and other languages became incorporated into English through the Middle Ages, and name spellings changed even among the literate. The variations of the surname Bladen include Bladen, Bladon and others.

Notables of this surname at this time include: Colonel Bladen, Lord Justice of Ireland; and Sir Thomas Bladen (1698-1780), American politician and the 19th Proprietary Governor of Maryland from 1742 to 1747. Martin Bladen (1680-1746), was an English soldier and politician, the son of Nathaniel Bladen of Hemsworth, Yorkshire. "He is said to have passed a short time at a small private school in the country with...
Another 66 words (5 lines of text) are included under the topic Early Bladen Notables in all our PDF Extended History products and printed products wherever possible.

Migration of the Bladen family to Ireland

Some of the Bladen family moved to Ireland, but this topic is not covered in this excerpt.
Another 47 words (3 lines of text) about their life in Ireland is included in all our PDF Extended History products and printed products wherever possible.

Bladen migration to the United States +

Bladen Settlers in United States in the 18th Century

Bladen Settlers in United States in the 19th Century