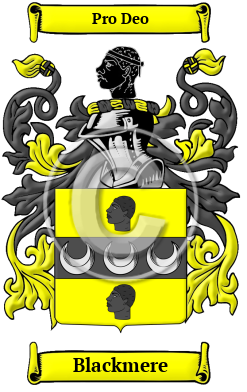 The ancestors of the name Blackmere date back to the days of the Anglo-Saxon tribes of Britain. The name is derived from their residence in the area of Blackmore. Early members lived near one of two places named Blakmore, a parish in the diocese of Winchester, and a parish in the diocese of St. Albans. The place-name is derived from the Old English words blaec, meaning black, and mor, meaning marsh, and would have been used to name a settlement near a dark marsh. Another source notes the name could have meant ‘dweller by the dark mere’ from the Old English 'blæc' + 'mere', from the Old English 'blæc,' and the Middle English 'Mor' ‘a Moor’.[1]

Early Origins of the Blackmere family

Baldwin de Blakomor was listed in the Pipe Rolls for Devon in 1200, as was Nicholas de Blakemore in the Assize Rolls for Staffordshire in 1307. [1]

In Somerset, Margery de Blakemor was recorded there 1 Edward III (in the first year of King Edward III's reign.) [4]

"The Blackmores are now numerous in Honiton and its neighbourhood, There is (or was) an epitaph in the Middle Temple church to Mark Blackmore, son of Mark Blackmore, of Harpford, in the county of Devon, gent. (Dugdale's "Orig. Jur. "), which cannot bear a later date than the early part of the 17th century. A family of the name lived in Exmouth last century: in 1746 Mr. Blackmore "leaded ye tower;" and in 1771 and 1811 William and John Blackmore were clerks of Exmouth Chapel (Webb) Blackmore and Blackmoor are places in Essex, Wilts, and other counties. Blakemore is now a Shropshire surname. Blakema and De Blakemor were surnames in Bucks, Oxon, and Essex six centuries ago." [6]

Early History of the Blackmere family

This web page shows only a small excerpt of our Blackmere research. Another 87 words (6 lines of text) covering the years 1086, 1654, 1729, 1684 and 1720 are included under the topic Early Blackmere History in all our PDF Extended History products and printed products wherever possible.

Blackmere has been spelled many different ways. Before English spelling became standardized over the last few hundred years, spelling variations in names were a common occurrence. As the English language changed in the Middle Ages, absorbing pieces of Latin and French, as well as other languages, the spelling of people's names also changed considerably, even over a single lifetime. Many variations of the name Blackmere have been found, including Blakemore, Blackmore, Blackamore, Blackmere and others.

Notables of the family at this time include Richard Blakemore, High Sheriff of Hereford; Sir Richard Blackmore (1654-1729), English poet and physician from Corsham, Wiltshire; Sir John Blackmore, English peer who was in the confidence of...
Another 36 words (3 lines of text) are included under the topic Early Blackmere Notables in all our PDF Extended History products and printed products wherever possible.

Migration of the Blackmere family

In an attempt to escape the chaos experienced in England, many English families boarded overcrowded and diseased ships sailing for the shores of North America and other British colonies. Those families hardy enough, and lucky enough, to make the passage intact were rewarded with land and a social environment less prone to religious and political persecution. Many of these families became important contributors to the young colonies in which they settled. Early immigration and passenger lists have documented some of the first Blackmeres to arrive on North American shores: Henry Blackmoor, who was a boat owner in Bona Vista, Newfoundland, in 1781; Jean Blackmore settled at Greenspond Pond, Newfoundland, in 1817; Isaac, Francis, Henry, Thomas and William Blakemore arrived in Philadelphia, Pennsylvania between 1830 and 1870.