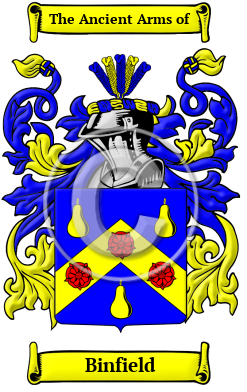 The distinguished surname Binfield is of ancient Anglo-Saxon origin. The name is derived from the Old English words "bean," meaning "bean," and "feld," meaning "field." This name is borne by several places in England, such as Benfield in Northamptonshire, Benville Manor in Dorset, and the now-lost Benfield in Sussex. Thus, the progenitor of the surname was most likely either someone who hailed from one of these places, or someone who lived near a bean field.

Early Origins of the Binfield family

The surname Binfield was first found in Hertfordshire, where Goduin de Benefelle was recorded as a land-holder in the Domesday Book. After the Norman Conquest of 1066, King William granted the lands of England to the barons that had served him in the Battle of Hastings. These barons followed the Norman practice of adopting the name of their land holdings; thus, it is possible that one branch of the Binfield family is descended from Richard, who was granted lands in the village of Benefield, East Northamptonshire.

"There are two villages about a mile apart, distinguished as Upper and Lower Benefield, the road from Oundle to Great Weldon proceeding through both." [1]

Early History of the Binfield family

Spelling variations in names were a common occurrence before English spelling was standardized a few hundred years ago. In the Middle Ages, even the literate spelled their names differently as the English language incorporated elements of French, Latin, and other European languages. Many variations of the name Binfield have been found, including Benfield, Benefield, Benfeld, Benefeld, Benefiel and others.

Notables of the family at this time include Sebastian Benefield (1559-1630), English divine and professor of theology at Oxford University. He was a native of Prestbury (or Prestonbury)...
Another 27 words (2 lines of text) are included under the topic Early Binfield Notables in all our PDF Extended History products and printed products wherever possible.

Migration of the Binfield family

Families began migrating abroad in enormous numbers because of the political and religious discontent in England. Often faced with persecution and starvation in England, the possibilities of the New World attracted many English people. Although the ocean trips took many lives, those who did get to North America were instrumental in building the necessary groundwork for what would become for new powerful nations. Some of the first immigrants to cross the Atlantic and come to North America bore the name Binfield, or a variant listed above: Henry Benfield, who came to Virginia in 1674; Brasil Benfield, who settled in Barbados in 1678 with his wife Rebeccah and their son Edward; Thomas Benfield, who came to Virginia in 1721.