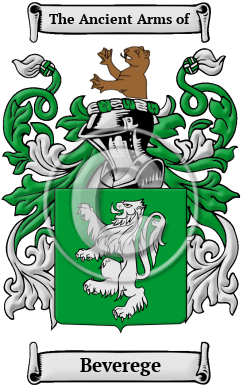 The ancestors of the name Beverege date back to the days of the Anglo-Saxon tribes of Britain. The name is derived from their residence on Beverege, an island in the Severn River, about 4 miles north of Worcester.

"Mr. Beveridge says the origin of the name is to be found in 'Beverege,' the name of an island in the Severn referred to by Florence of Worcester as a retreat of the Danes during a revolt of the English [in 1041]. The name, he correctly says, means 'Beaver island,' from Old English befer or beofer, and ig or ige, island." [1] Later known as Bevere Island, this island became a refuge once again during the Black Death.

Camden notes: "The existence of the beaver in Britain within historical memory seems proved by such names as Beverege, Beverley, perhaps but less likely Beverstone in Gloucestershire." He speaks of beavers in his time in the Teifi, but in Teifi only. Another source noted the name was derived from "Beferige, i. e. 'the Beaver's edge,' Several other local names in Befer, in that collection, show that the beaver was an inhabitant of this island in Saxon times." [2]

While the name Beverege may have arisen in the southwest of England, it is generally associated with Yorkshire and Scotland.

Early Origins of the Beverege family

The surname Beverege was first found in Buckinghamshire where the first record of the family was Wido, William Beverage who was listed in the Curia Regis Rolls of 1212 and later in the Pipe Rolls of Surrey in 1230. Richard Bevereche was listed c. 1240 in Huntingdonshire. The Assize Rolls of Somerset in 1280 list William Bauerich. [3] This latter source notes the origin of the name as having derived from the Middle English word "beuerage," or the Old French word "bevrege, buverage" meaning "drink, liquor for consumption." By far, the lion's share of sources claim that the name originates from the aforementioned Beverege Island with this source and one other eluding to the more contemporary use of the word.

In Scotland it was a name very difficult for the Scottish tongue, pronunciation and spellings became numerous. Here they settled in St. Andrews in 1302 where Walter Beverage is named as juror on an inquest at St. Andrews. Years later, Henry Beveragh was witness in Paisley, 1504 and a decree against Alexander Bauerage is recorded in 1531. David Beverage was cup-bearer to James V in 1534. [1]

Early History of the Beverege family

Beverege has been spelled many different ways. Before English spelling became standardized over the last few hundred years, spelling variations in names were a common occurrence. As the English language changed in the Middle Ages, absorbing pieces of Latin and French, as well as other languages, the spelling of people's names also changed considerably, even over a single lifetime. Many variations of the name Beverege have been found, including Beveridge, Belfridge, Belfrage, Beverage, Beveradge, Bevidge, Bevige, Berridge and many more.

Distinguished members of the family include William Beveridge (1637-1708), an English clergyman, Bishop of St Asaph (1704-1708.) He was the "son of the Rev. William Beveridge, B.D., was...
Another 28 words (2 lines of text) are included under the topic Early Beverege Notables in all our PDF Extended History products and printed products wherever possible.

Migration of the Beverege family

In an attempt to escape the chaos experienced in England, many English families boarded overcrowded and diseased ships sailing for the shores of North America and other British colonies. Those families hardy enough, and lucky enough, to make the passage intact were rewarded with land and a social environment less prone to religious and political persecution. Many of these families became important contributors to the young colonies in which they settled. Early immigration and passenger lists have documented some of the first Bevereges to arrive on North American shores: John Beveridge who settled in New England in 1685; Mary Beveridge settled in Maryland in 1774; Robert Beveridge arrived in New York in 1823; William Bevidge landed in Philadelphia, Pennsylvania in 1864..