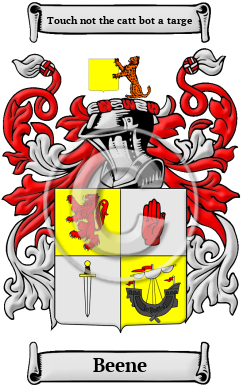 The Picts of ancient Scotland were the tribe of the ancestors of the Beene family. The name Beene is derived from the Gaelic word Beathan or betha which means life. Bean was also the name of a saint in the Breviary of Aberdeen.

Early Origins of the Beene family

The surname Beene was first found in Aberdeen (part of the modern Grampian region), where one of the first times the name arose was a Bean who was a magistrate circa 1210. It is known, however, that the MacBains moved to Invernessshire, as sod bearers to the Chiefs of the great Clan Chattan (a powerful confederation of early Clans). The name literally means "son of the fair lad," and was frequently translated to MacBean (Bain.)

Early History of the Beene family

This web page shows only a small excerpt of our Beene research. Another 139 words (10 lines of text) covering the years 1411, 1400, 1550 and 1745 are included under the topic Early Beene History in all our PDF Extended History products and printed products wherever possible.

Scribes in the Middle Ages did not have access to a set of spelling rules. They spelled according to sound, the result was a great number of spelling variations. In various documents, Beene has been spelled Bean, Beane, Beyn, Bayn, Bene, Bane, Baine, Beine, Bayne, Beyne, Been, Beaine, MacBain, MacBean, MacVain, MacBean, MacVan and many more.

More information is included under the topic Early Beene Notables in all our PDF Extended History products and printed products wherever possible.

In the United States, the name Beene is the 8,594th most popular surname with an estimated 2,487 people with that name. [2]

Migration of the Beene family to Ireland

Some of the Beene family moved to Ireland, but this topic is not covered in this excerpt. More information about their life in Ireland is included in all our PDF Extended History products and printed products wherever possible.

Beene migration to the United States +

The cruelties suffered under the new government forced many to leave their ancient homeland for the freedom of the North American colonies. Those who arrived safely found land, freedom, and opportunity for the taking. These hardy settlers gave their strength and perseverance to the young nations that would become the United States and Canada. Immigration and passenger lists have shown many early immigrants bearing the name Beene:

Beene Settlers in United States in the 17th Century