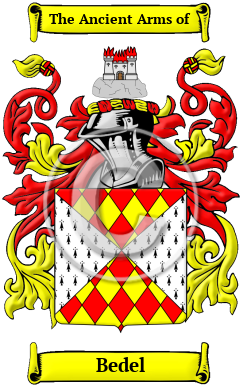 The Anglo-Saxon name Bedel comes from when the family resided in Bidwell, Hertfordshire. This place name derives from the Old English words "byde," meaning "tub," and "well," meaning a "spring," or "stream." As such, Bedel is classed as a habitational name.

Early Origins of the Bedel family

The surname Bedel was first found in Bedfordshire (Old English: Bedanfordscir), located in Southeast-central England, formerly part of the Anglo-Saxon kingdom of Mercia, where Bidwell was said to be a picturesque hamlet lying to the north-west of Houghton village. [1]

There is an early record of a Stephen de Bedewellin in Essex in the Calendar of the Close Rolls, in 1229. [2]

Early History of the Bedel family

Before English spelling was standardized a few hundred years ago, spelling variations of names were a common occurrence. Elements of Latin, French and other languages became incorporated into English through the Middle Ages, and name spellings changed even among the literate. The variations of the surname Bedel include Bedwell, Bedwel, Bedewell, Bidwell, Bidewell and many more.

Notables of the family at this time include William Bedwell (1561-1632), Vicar of Tottenham, Middlesex, an English priest and scholar, who specialized in mathematics and foreign languages and Thomas Bedwell, who held the position of "Storekeeper of the Ordnance" of England, 1589-1595. William Bedwell (d. 1632), was nephew of "Thomas Bedwell, and father of Arabic studies in England, was born in 1561 or 1562, for his tombstone in the chancel of Tottenham church makes him aged...
Another 74 words (5 lines of text) are included under the topic Early Bedel Notables in all our PDF Extended History products and printed products wherever possible.

Migration of the Bedel family to Ireland

Some of the Bedel family moved to Ireland, but this topic is not covered in this excerpt.
Another 162 words (12 lines of text) about their life in Ireland is included in all our PDF Extended History products and printed products wherever possible.

Bedel migration to the United States +

Bedel Settlers in United States in the 19th Century