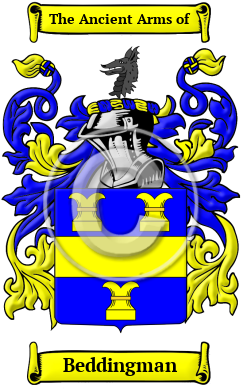 The name Beddingman is an old Anglo-Saxon name. It comes from when a family lived in either of the places called Bodenham, in Herefordshire and Wiltshire, or in the settlement of Bodham, in Norfolk. The place-names are derived from the Old English personal name Bota, which experts theorize is derived from the Old German boto, from the Germanic root bud, which means to announce, and the Old English word ham which means homestead or settlement. Thus, the surname signifies a person who lived at or near Bota's settlement.

Early Origins of the Beddingman family

The surname Beddingman was first found in Herefordshire at Bodenham, a parish, and anciently a market-town, in the union of Leominster, hundred of Broxash [1] situated on a bend in the River Lugg, about seven miles south of Leominster. The place name dates back to the Domesday Book of 1086 where it was first listed as Bodeham [2] and literally meant "homestead or river-bend of land or a man called Boda," from the Old English personal name + "hamm." [3] Hugh de Bodenham, Lord of Bodenham, grandfather of Roger who lived in the reign of Henry III is the ancestor of the family. [4]

Early History of the Beddingman family

Before the last few hundred years, the English language had no fast system of spelling rules. For that reason, spelling variations are commonly found in early Anglo-Saxon surnames. Over the years, many variations of the name Beddingman were recorded, including Bedingham, Beddingham, Bedinham, Bodingham, Bedyngham, Bedyngeham and many more.

Migration of the Beddingman family

To escape oppression and starvation at that time, many English families left for the "open frontiers" of the New World with all its perceived opportunities. In droves people migrated to the many British colonies, those in North America in particular, paying high rates for passages in cramped, unsafe ships. Although many of the settlers did not make the long passage alive, those who did see the shores of North America perceived great opportunities before them. Many of the families that came from England went on to make essential contributions to the emerging nations of Canada and the United States. Research into various historical records revealed some of first members of the Beddingman family emigrate to North America: a number of settlers who arrived by the 19th century.