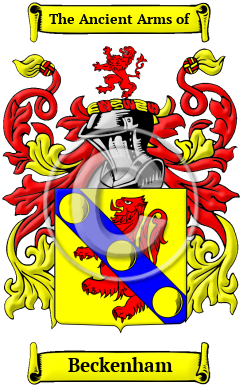 The origins of the Beckenham name come from when the Anglo-Saxon tribes ruled over Britain. The name Beckenham was originally derived from a family having lived in the parish of Buckingham in Oxfordshire. "This place is of great antiquity, and is supposed to have derived its name from the Saxon Bucca, a 'stag' or 'buck,' ing, a 'meadow,' and ham, a 'village;' being surrounded with extensive forests well stocked with deer. In 915, Edward the Elder fortified both sides of the river, where the town is situated, with high ramparts of earth, to protect the inhabitants from the incursions of the Danes; the remains are still visible. In 941, the Danes perpetrated dreadful outrages in the neighbourhood, and in 1010 took possession of the town as a place of safety. In the reign of Edward III., Buckingham sent three representatives to a council of trade held at Westminster. " [1]

Early Origins of the Beckenham family

The surname Beckenham was first found in Oxfordshire where the first record of the family was listing in the Hundredorum Rolls of 1273: John de Bukingham. [2]

"The Buckinghams are well represented in the South Molton district. There was an old Exeter family of Buckenham, members of which three times filled the office of mayor in the reign of Henry VIII." [3]

The Buckenham or Bokenham variants could have originated in either Old Buckenham or New Buckenham, parishes in the union of Guiltcross, hundred of Shropham, Norfolk. In this latter case, "this place owes its origin to William D'Albini, Earl of Chichester, who, disliking the situation of a castle which had been built at Old Buckenham about the time of the Conquest, demolished that structure, and erected another here, in the reign of Henry II." [1]

Osbern Bokenham or Bokenam (1383-1447?), was an early poet in the Suffolk dialect, born, according to his own statement, on 6 Oct. 1393. His birthplace was near 'an old pryory of blake canons,' which may be identified with Bokenham - the modern Old Buckenham, Norfolk, famous at one time for its Augustinian priory. " [4]

John Bokyngham or Buckingham (d. 1398), was Bishop of Lincoln, Rector of Olney, Prebendary of Lichfield, and dean in 1349. "He was appointed to the archdeaconry of Northampton in 1361, and in 1352 received from the king the prebend of Gretton in the church of Lincoln. He was keeper of the privy seal to Edward III. " [4]

Early History of the Beckenham family

Before English spelling was standardized a few hundred years ago, spelling variations of names were a common occurrence. Elements of Latin, French and other languages became incorporated into English through the Middle Ages, and name spellings changed even among the literate. The variations of the surname Beckenham include Buckingham, Buckinghame, Beckingham, Beckinhame, Buckinham, Bukingham, Buckenham, Bockingham and many more.

Notables of the family at this time include Robert Buckenham (fl. 1530), Prior of the Dominican or Black Friars at Cambridge, in which university he took the degrees of B.D. in 1524 and D.D. in 1531. [4] Sir Owen Buckingham (c.1649-1713), was an English merchant, alderman...
Another 45 words (3 lines of text) are included under the topic Early Beckenham Notables in all our PDF Extended History products and printed products wherever possible.

Beckenham Settlers in Australia in the 19th Century