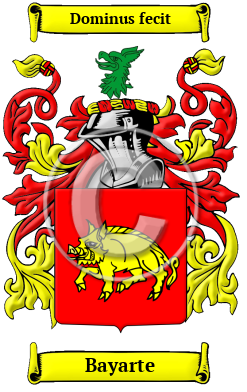 The Strathclyde-Briton people of ancient Scotland were the first to use the name Bayarte. It is a name for someone who works as a poet, which was originally derived from the Gaelic word bard. [1]

Early Origins of the Bayarte family

The surname Bayarte was first found in Lanarkshire (Gaelic: Siorrachd Lannraig) a former county in the central Strathclyde region of Scotland, now divided into the Council Areas of North Lanarkshire, South Lanarkshire, and the City of Glasgow, where they held a family seat from ancient times.

Early History of the Bayarte family

Before the printing press standardized spelling in the last few hundred years, no general rules existed in the English language. Spelling variations in Scottish names from the Middle Ages are common even within a single document. Bayarte has been spelled Baird, Bard, Barde, Baard, Bayard, Beard and many more.

Notable amongst the family at this time was Henry Bard, 1st Viscount Bellomont (1616-1656), an English Royalist; Charles Rupert Bard, 2nd Viscount Bellomont (1647-1667); and Sir John Baird of Newbyth, Lord Newbyth (1620-1698), a Scottish advocate, judge, politician and diplomat, Commissioner for Aberdeenshire in the Parliament of Scotland; Sir William Baird, 1st and 2nd Baronet of Newbyth (1654-1737); Sir John Baird, 2nd and 3rd Baronet of Newbyth (1686-1745); Sir Robert Baird, 1st Baronet of Saughtonhall (died 1697); and his son...
Another 79 words (6 lines of text) are included under the topic Early Bayarte Notables in all our PDF Extended History products and printed products wherever possible.

Migration of the Bayarte family to Ireland

Some of the Bayarte family moved to Ireland, but this topic is not covered in this excerpt.
Another 59 words (4 lines of text) about their life in Ireland is included in all our PDF Extended History products and printed products wherever possible.

Migration of the Bayarte family

For Scottish immigrants, the great expense of travel to North America did not seem such a problem in those unstable times. Acres of land awaited them and many got the chance to fight for their freedom in the American War of Independence. These Scots and their ancestors went on to play important roles in the forging of the great nations of the United States and Canada. Among them: James Baird who arrived in America in 1685; John Baird settled in Charles Town [Charleston], South Carolina in 1773; Thomas Baird settled in Philadelphia, Pennsylvania in 1774.