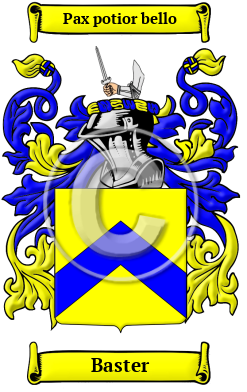 The Norman name Baster was originally used for a person who was a child of illegitimate birth but such references are in jest.

Early Origins of the Baster family

The surname Baster was first found in Devon, where they are descended from "Robert Bastard, who held several manors in this county in the reign of William I. For several generations Efford, in the parish of Egg-Buckland, was the seat of this family. " [1]

"In Norman times illegitimacy was not regarded with the same contempt as now. The Conqueror himself, though illegitimate, not only succeeded to his father’s duchy, but frankly avowed himself as a bastard in official writings." [2]

"The church [of West Alvington in Devon] contains some good screen-work in carved oak, and a beautiful monument to a member of the Bastard family, whose ancient seat has been converted into a farmhouse." [3]

Early History of the Baster family

Outstanding amongst the family at this time was Thomas Bastard (c. 1565-1618) an English clergyman famed for his published English language epigrams. He was born in Blandford Forum, Dorset, England and is best known for seven books of 285...
Another 38 words (3 lines of text) are included under the topic Early Baster Notables in all our PDF Extended History products and printed products wherever possible.

Baster migration to the United States +

Because of the political and religious discontent in England, families began to migrate abroad in enormous numbers. Faced with persecution and starvation at home, the open frontiers and generally less oppressive social environment of the New World seemed tantalizing indeed to many English people. The trip was difficult, and not all made it unscathed, but many of those who did get to Canada and the United States made important contributions to the young nations in which they settled. Some of the first North American settlers with Baster name or one of its variants:

Baster Settlers in United States in the 17th Century

Baster Settlers in United States in the 18th Century

Baster Settlers in United States in the 19th Century