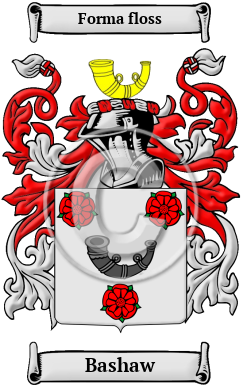 The origins of the Bashaw name lie with England's ancient Anglo-Saxon culture. It comes from when the family lived in Derbyshire, where they were found since the early Middle Ages before the Norman Conquest in 1066.

We should take a moment to explore one source's claim that the name came from "Bagshot; a location name in Surrey, Wiltshire. " [1]

As far as the chapelry of Bagshot in Surrey is concerned, "this place, [was] formerly called Holy Hall. It was once a residence of the kings of England, who had a mansion here, and a park, which was laid open after the civil war in the reign of Charles I.: the house was occupied by the late Duke of Gloucester. On the borders of Bagshot Heath are some handsome villas. " [2] So one cannot deny that this would an agreeable and noble place to claim descent, the fact that "Holy Hall" was the original name of the chapelry seems to negate the possibility. That leaves the hamlet of Bagshot in Wiltshire as a possibility. We doubt this possibility too, as by the late 1800s, the hamlet's population was only 194. [2] Accordingly, we must defer to the aforementioned Derbyshire as the most likely place of origin.

Early Origins of the Bashaw family

The surname Bashaw was first found in Derbyshire. The first record was of Nicholas Bagshawe who married Alice of the Hall. He was forester to the King. He acquired the lands of Wormhill, and later built Wormhill Hall. " Derbyshire is the great home of the Bagshaws, who have preserved a distinguished name since the 15th century, when they resided at Abney and Wormhill." [3]

Nicholas Bagshawe and Humphry Bagshawe were both listed in the Calendar of Proceedings in Chancery, temp. Elizabeth I. [5] In the 13th century the name of De Baggesoure occurred in Shropshire. [3]

Early History of the Bashaw family

Before the last few hundred years, the English language had no fast system of spelling rules. For that reason, spelling variations are commonly found in early Anglo-Saxon surnames. Over the years, many variations of the name Bashaw were recorded, including Bagshaw, Bagshawe, Bagshott, Bagshot, Bagshote and others.

Distinguished members of the family include Sir Richard Bagshaw, Sheriff of Derby and Nottingham; Edward Bagshaw (or Bagshawe) the elder (ca. 1589-1662), an English author and politician who sat in the House of Commons from 1640 to 1644, supporter of the Royalist cause in the English Civil War. Christopher Bagshaw (d. 1625?), was an English priest who came of a Derbyshire family. "Before going to Oxford he appears to have studied for a short time at Cambridge. "In 1593 he was confined with other priests and gentlemen in Wisbeach Castle. His fellow prisoners held him at first in great...
Another 98 words (7 lines of text) are included under the topic Early Bashaw Notables in all our PDF Extended History products and printed products wherever possible.

Migration of the Bashaw family to Ireland

Some of the Bashaw family moved to Ireland, but this topic is not covered in this excerpt.
Another 53 words (4 lines of text) about their life in Ireland is included in all our PDF Extended History products and printed products wherever possible.

Bashaw migration to the United States +

To escape oppression and starvation at that time, many English families left for the "open frontiers" of the New World with all its perceived opportunities. In droves people migrated to the many British colonies, those in North America in particular, paying high rates for passages in cramped, unsafe ships. Although many of the settlers did not make the long passage alive, those who did see the shores of North America perceived great opportunities before them. Many of the families that came from England went on to make essential contributions to the emerging nations of Canada and the United States. Research into various historical records revealed some of first members of the Bashaw family emigrate to North America:

Bashaw Settlers in United States in the 17th Century