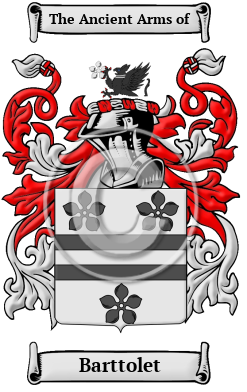 The ancestors of the Barttolet family first reached the shores of England in the wave of migration after the Norman Conquest of 1066. Their name is derived from the personal name Bartholomew, and in its altered form is a baptismal name meaning Bartholomew. As the naming tradition grew in Europe baptismal names began to be introduced in many countries. Baptismal names were sometimes given in honor of Christian saints and other biblical figures. There are very few Christian countries in Europe that did not adopt surnames from these religious figures.

Early Origins of the Barttolet family

The surname Barttolet was first found in Sussex, where "the head of this family, according to Dallaway, may be considered one of the most ancient proprietors of land residing upon this estate in this county. The first in the pedigree is Adam de Bartelott, said to be of Norman origin, father of John, who married Joan Stopham, coheiress of lands in the manor from whence the name is derived." [1]

Another reference claim "the Barttelots of Stopham have a tradition that they came into England at the Conquest, and settled at a place called La Ford, in that parish, in which they still reside." [2]

The church of Stopham contains a long series of the family's monuments. "The church is partly in the early and partly in the decorated English style, with a square tower; the pavement is almost entirely composed of large slabs of Sussex marble, inlaid with brass figures and memorials of the Barttelot family, and in the windows are representations of some of the Barttelots and Stophams in stained glass, said to have been removed from the ball windows of the old manor-house." [3]

Early History of the Barttolet family

Norman surnames are characterized by a multitude of spelling variations. The frequent changes in surnames are largely due to the fact that the Old and Middle English languages lacked definite spelling rules. The introduction of Norman French to England, as well as the official court languages of Latin and French, also had pronounced influences on the spelling of surnames. Since medieval scribes and church officials recorded names as they sounded, rather than adhering to any specific spelling rules, it was common to find the same individual referred to with different spellings. The name has been spelled Bartlett, Bartlet, Bartlette, Bartolet, Bartelot and many more.

Outstanding amongst the family at this time was John Barthlet or Bartlett ( fl. 1566), an English theological writer. John Bartlet (fl. 1662), was an English nonconformist divine, educated at the University of Cambridge and William Bartlet (died 1682), was an English independent minister, educated at New Inn Hall, Oxford. [4] Richard Bartlot (1471-1557), was an English physician, Fellow of All Souls' College, and took the degree...
Another 65 words (5 lines of text) are included under the topic Early Barttolet Notables in all our PDF Extended History products and printed products wherever possible.

Migration of the Barttolet family

Many English families emigrated to North American colonies in order to escape the political chaos in Britain at this time. Unfortunately, many English families made the trip to the New World under extremely harsh conditions. Overcrowding on the ships caused the majority of the immigrants to arrive diseased, famished, and destitute from the long journey across the stormy Atlantic. Despite these hardships, many of the families prospered and went on to make invaluable contributions to the development of the cultures of the United States and Canada. Early North American immigration records have revealed a number of people bearing the name Barttolet or a variant listed above: Thomas Bartlett who settled in Watertown, Massachusetts from Sussex, England in 1634; John Bartlett settled in Newbury, Massachusetts from Kent, England in 1635.