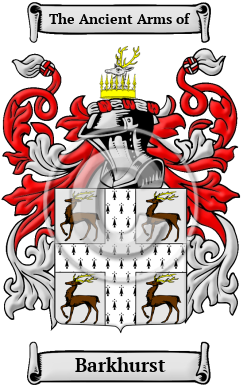 The origins of the Barkhurst name come from when the Anglo-Saxon tribes ruled over Britain. The name Barkhurst was originally derived from a family having lived in the region of Parkhurst or wood in the park. Barkhurst is a topographic surname, which was given to a person who resided near a physical feature such as a hill, stream, church, or type of tree. Habitation names form the other broad category of surnames that were derived from place-names. They were derived from pre-existing names for towns, villages, parishes, or farmsteads.

Early Origins of the Barkhurst family

The surname Barkhurst was first found in Herefordshire where Sir Osbern Pentecost (died 1054), a Norman knight who followed Edward the Confessor to England built the castle at Ewyas, one of the first Motte and Bailey structures in England. He like many other Normans was banished from England so he secured safe passage to Scotland in 1052 but was later killed at the Battle of Dunsinane.

Early History of the Barkhurst family

Before English spelling was standardized a few hundred years ago, spelling variations of names were a common occurrence. Elements of Latin, French and other languages became incorporated into English through the Middle Ages, and name spellings changed even among the literate. The variations of the surname Barkhurst include Parkhurst, Pankhurst and others.

Notables of this surname at this time include: Emily Pankhurst, Suffragette; John Parkhurst (c. 1511-1574), an English Marian exile and later Bishop of Norwich in 1560; Sir Robert Parkhurst (c.1569-1636), an English merchant who was Lord Mayor of...
Another 38 words (3 lines of text) are included under the topic Early Barkhurst Notables in all our PDF Extended History products and printed products wherever possible.

Barkhurst migration to the United States +

Barkhurst Settlers in United States in the 18th Century