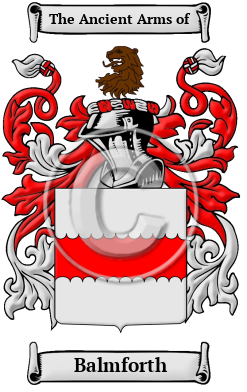 The Anglo-Saxon name Balmforth comes from when the family resided in one of two places named Bamford in the counties of Derbyshire and Lancashire. [1] [2]

Later records show the name in Yorkshire as well. Checking further we found the name was derived from the Old English words beam, meaning tree or plank, and ford, meaning river crossing. In this case the name referred to a settlement near which there was a tree or plank laid across a river to make a dry crossing. [3]

Early Origins of the Balmforth family

The surname Balmforth was first found in Lancashire, where "the estate of Bamford was granted to Thomas de Bamfordby, Sir Adam de Bury, temp. Henry III, for his homage and services." [4]

As noted above, Yorkshire was later a stronghold of family as noted by early rolls. The Hundredorum Rolls list Richard de Bamford there in 1273 and later the Yorkshire Poll Tax Rolls of 1379 list: Adam Bamforth and Adam de Baumford. [4]

Another source notes: "In the 17th century there was an old family of Bamford of Bamford House; there was also another family of Bamford Hall. Jerome Bamford held land in the Mealegate in the manor of Manchester during the reign of Elizabeth. The name was well established in Rochdale parish in the 16th century, and still occurs there. There is a Lancashire village thus called." [5]

Early History of the Balmforth family

Before English spelling was standardized a few hundred years ago, spelling variations of names were a common occurrence. Elements of Latin, French and other languages became incorporated into English through the Middle Ages, and name spellings changed even among the literate. The variations of the surname Balmforth include Bamford, Banford, Banforth, Balmforth and others.

Distinguished members of the family include William Bamford, last of the Bamford Hall line, Sheriff of Lancaster. James Balmford (b. 1556), was an English divine who published in 1593-1594, a 'Short and Plaine Dialogue concerning the unlawfulness of playing at cards,' London. [6] Samuel Balmford...
Another 43 words (3 lines of text) are included under the topic Early Balmforth Notables in all our PDF Extended History products and printed products wherever possible.

Migration of the Balmforth family to Ireland

Some of the Balmforth family moved to Ireland, but this topic is not covered in this excerpt.
Another 58 words (4 lines of text) about their life in Ireland is included in all our PDF Extended History products and printed products wherever possible.

Balmforth Settlers in Australia in the 19th Century