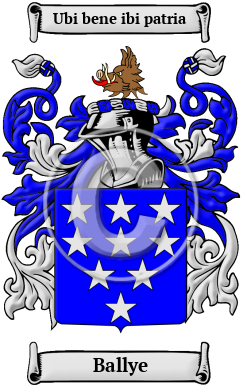 The Norman Conquest of 1066 added many new names to the island of Britain. Ballye is a name for a person who held the civil office of the same name in Normandy. The title 'Le Bailli' was approximately equal to that of Viscount or sheriff. [1] There was also a place named Bailleul-En-Vimeu which is about six miles south of Abbeyville in the Somme, Normandy from which some instances of the surname may have evolved. The name Ballye is also an occupational name for a steward or official, deriving from "baiulivus" in Late Latin. In Scotland the word bailie, rather than bailiff is still used as the title for an officer in the courts.

Early Origins of the Ballye family

The surname Ballye was first found in Northumberland. However, there is still great controversy over the earliest origins of the name. There was great popular belief that the name was changed from Balliol, due to the unpopularity of the two Scottish Kings of that name. However, many historians, such as Bain, find no evidence for such a change, and cite very early instances of the name Baillie, such as William de Bailli, who appeared as a juror on an inquest concerning forfeited lands in Lothian around 1311-12. [2]

Early records of the Baillie Clan indicate that the aforementioned William de Bailli was also known as Baillie of Hoperig, who acquired the lands of Lamington in Lanarkshire. His son William was granted a charter confirming ownership of these same lands in 1358. Alexander, the eldest grandson of William and two brothers fled the country after they had beaten and killed their tutor. After serving in the army, Alexander received the lands of Dunain and Dochfour, and was appointed the Constable of Inverness. Another brother of Alexander's married a daughter of Sir Patrick Hume's in 1492, and from this union descended the Baillies of Jerviswood.

Early History of the Ballye family

Before the last few hundred years the English language had no fixed system of spelling rules. For that reason, spelling variations occurred commonly in Anglo Norman surnames. Over the years, many variations of the name Ballye were recorded, including Baillie, Bailey, Bailie, Bayly, Bayley, Bailley, Baly, Ballye, Bayllie and many more.

Outstanding amongst the family at this time was John Balliol King of Scotland from 1292-1296; Dr Richard Baylie (1585-1667), twice President of St John's College, Oxford, twice Vice-Chancellor of Oxford University and Dean of Salisbury; John Bayley (died 1611), an English politician, Mayor of Salisbury in 1587, Member of the Parliament for Salisbury in 1589; Robert Baillie of Jerviswood (1632-1684), a civil and religious reformer, eventually put to death for his outspokenness; Robert Baillie (Baillie of Jerviswood) (ca.1634-1684), a Scottish conspirator implicated in the Rye House Plot against King Charles...
Another 89 words (6 lines of text) are included under the topic Early Ballye Notables in all our PDF Extended History products and printed products wherever possible.

Migration of the Ballye family to Ireland

Some of the Ballye family moved to Ireland, but this topic is not covered in this excerpt.
Another 174 words (12 lines of text) about their life in Ireland is included in all our PDF Extended History products and printed products wherever possible.

Migration of the Ballye family

The unstable environment in England at this time caused numerous families to board ships and leave in search of opportunity and freedom from persecution abroad in places like Ireland, Australia, and particularly the New World. The voyage was extremely difficult, however, and only taken at great expense. The cramped conditions and unsanitary nature of the vessels caused many to arrive diseased and starving, not to mention destitute from the enormous cost. Still opportunity in the emerging nations of Canada and the United States was far greater than at home and many went on to make important contributions to the cultures of their adopted countries. An examination of many early immigration records reveals that people bearing the name Ballye arrived in North America very early: Mary Bailey, who was listed as being in Virginia in the year 1619; Jonas Bailey, who was recorded in Maine in 1634; James Baillou who settled in Georgia in 1733 with his wife and son, Elizabeth, Mathew, Matty, Stewart, William Bailie, who all arrived in Philadelphia in 1804. John, Joseph, Mathew, Robert, Samuel, Thomas, Walter, William Bailey, who arrived in Pennsylvania between 1770 and 1840. Several of the name came to Newfoundland. Among them were Richard Bayly, who settled in Bay de Verde in 1675.