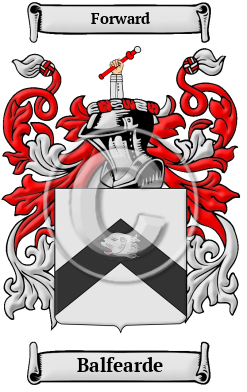 In Scottish history, few names go farther back than Balfearde, whose ancestors lived among the clans of the Pictish tribe. The ancestors of the Balfearde family lived in the barony of Balfour, in the parish of Markinch in Fife. The name is a topographic or local surname, which was given to a family who held a barony or lands, had houses, manors or estates in the area. The name may also be derived from the Gaelic word baile which means a place and the Pictish word pawr which means pasture. [1] [2]

Early Origins of the Balfearde family

The surname Balfearde was first found in Fife, from the lands or barony named Balfour, near the junction of the rivers Ore and Leven in the parish of Markinch. The first record of the family was John de Balfure, who appears on an Assize Roll in 1304. William de Balfure witnessed a charter by Duncan, Earl of Fife between 1331 and 1335 and Michael de Balfoure who witnessed a confirmation charter by David II to Ysabella de Fyf in 1365. He may be the Michael de Balfwre who was present at the perambulation of the bounds of Kyrknes and Louchor in 1395. "Over twenty branches of the family of Balfour possessed at one time or another landed property in Fife. The name was originally pronounced with the accent on the last syllable, but Anglified usage has shifted the stress forward to the first. " [3]

Early History of the Balfearde family

Although Medieval Scotland lacked a basic set of spelling rules, which meant that scribes recorded names according to their sounds it was not uncommon for the names of a father and son to be recorded differently. As a result, there are many spelling variations of Scottish single names. Balfearde has been written Balfour, Balfoure, Balfower, Balfowir, Balford, Balforde and many more.

Notable amongst the Clan at this time was Sir William Balfour (died 1660), from Pitcullo, Fifeshire, Scotland, General of the parliamentary forces during the English Civil War; Robert Balfour, 4th of Balbirnie (1698-1767); Sir Michael Balfour of Burleigh; Sir James Balfour, 1st Baronet (1600-1658), Scottish annalist and antiquary, Lord Lyon King of Arms from 1650-1658; Sir James Balfour (1525-1583) Lord Pittendreich, Scottish judge and politician, who...
Another 65 words (5 lines of text) are included under the topic Early Balfearde Notables in all our PDF Extended History products and printed products wherever possible.

Migration of the Balfearde family to Ireland

Some of the Balfearde family moved to Ireland, but this topic is not covered in this excerpt.
Another 68 words (5 lines of text) about their life in Ireland is included in all our PDF Extended History products and printed products wherever possible.

Migration of the Balfearde family

Thousands of Scots left their home country to travel to Ireland or Australia, or to cross the Atlantic for the North American colonies. The difficult crossing was an enormous hurdle, but those who survived found freedom and opportunity in ample measure. Some Scots even fought for their freedom in the American War of Independence. This century, their ancestors have become aware of the illustrious history of the Scots in North America and at home through Clan societies and other organizations. Passenger and immigration lists show many early and influential immigrants bearing the name Balfearde: Gilbert, James, Janet, Samuel, William, all arrived at the Port of Philadelphia in Pennsylvania between 1820 to 1860.