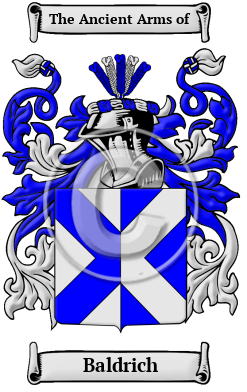 Early Origins of the Baldrich family

The surname Baldrich was first found in Northumberland where the first on record was Saint Baldred or Balthere (d. 608?), a "Northumbrian anchorite of the sixth century, the details of whose life are entirely mythical. He is said to have been suffragan of Kentigern of Glasgow, but all the localities connected with his cultus are in Lothian. Baldred was one of the island saints more common in Celtic than in English hagiology. Baldred's feast-day is 6 March. Another Baldred, or Baltherus, who was a hermit of Durham, flourished about a century later, and after such miracles as walking on the sea died in 756. " [1]

Further to the south, Baldred (fl. 823-825), was King of Kent, during the dissensions which weakened Mercia after the death of Cenwulf, endeavoured to make Kent independent of that kingdom.

Many years later, Baldred, decanus Laodonie, c. 1235 was listed and "Master Baldred (Bisset) le Scot, one of the commissioners sent to Rome to plead the cause of the independence of Scotland before the Pope, coming from beyond seas to Stirling Castle, had a safe conduct through England in 1306. " [2] There was an early Latin entry before this point: "Boldredus, official domini Sanctiandree, 1282 ."

Early History of the Baldrich family

During the era when a person's name, tribe and posterity was one of his most important possessions, many different spellings were found in the archives examined. Baldrich occurred in many references, and spelling variations of the name found included Baldrick, Baldred, Baldridge, Balrich, Baldrey and many more.

Notable amongst the family name during their early history was Thomas Baldry (c.1481-1524), English politician, Member of Parliament for Ipswich in 1504, 1512 and 1515; Edmund Boldero (1608-1679), an English royalist clergyman and academic, Master of Jesus College, Cambridge from...
Another 40 words (3 lines of text) are included under the topic Early Baldrich Notables in all our PDF Extended History products and printed products wherever possible.

Migration of the Baldrich family to Ireland

Some of the Baldrich family moved to Ireland, but this topic is not covered in this excerpt.
Another 40 words (3 lines of text) about their life in Ireland is included in all our PDF Extended History products and printed products wherever possible.

Migration of the Baldrich family

Gradually becoming disenchanted with life in Ireland many of these uprooted families sailed aboard the armada of sailing ships known as the "White Sails" which plied the stormy Atlantic. These overcrowded ships often arrived with only 60 to 70% of their original passenger list, many dying of illness and the elements, were buried at sea. In North America, early immigrants bearing the family name Baldrich, or a spelling variation of the surname include: James Baldridge who settled in Maryland in 1634; Thomas Baldridge settled in Maryland in 1634. This family later enjoyed the distinction of being one of the distinguished families of the U.S.A..