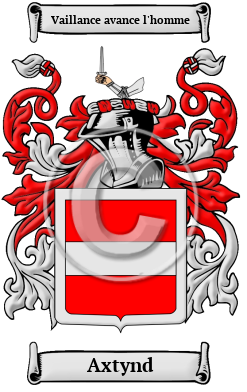 The history of the Axtynd family goes back to the ancient Anglo-Saxon culture of Britain. It is derived from the family living in the settlement of Axton, in the county of Kent.

Early Origins of the Axtynd family

The surname Axtynd was first found in Cheshire, Shropshire, and Worcestershire. Sometime before the Norman Conquest in 1066 they held a family seat at Ombersley in their mansion Castle known as Acton Hall, in Worcestershire. "Engelard de Acton, of Acton-Pigot and Acton-Burnell, was admitted on the Roll of Guild Merchants of Shrewsbury in 1209. His descendant Edward de Acton, of Aldenham, married the coheiress of L'Strange, living in 1387, and with her acquired an estate in Longnor, in the county. [Shropshire]" [1]

Aughton in Lancashire was an ancient family seat. " 'Achetun' was held before the Conquest by Uctred, the Saxon proprietor of Dalton and Skelmersdale; the manor, or parts of it, subsequently came to the families of Acton or Aughton." [2]

The parish of Acton-Round in Shropshire was another ancient family seat. "The church is a neat edifice, the walls of which are ornamented with monuments to the memory of the Actons, by one of whom, Sir Richard, the chancel was built in 1761." [2]

Another early listing of the name was John Acton (died 1350), an English canon lawyer known for his commentary on the ecclesiastical Constitutions of two papal legates: Cardinal Otto; and Ottobone.

Early History of the Axtynd family

Until quite recently, the English language has lacked a definite system of spelling rules. Consequently, Anglo-Saxon surnames are characterized by a multitude of spelling variations. Changes in Anglo-Saxon names were influenced by the evolution of the English language, as it incorporated elements of French, Latin, and other languages. Although Medieval scribes and church officials recorded names as they sounded, so it is common to find one person referred to by several different spellings of his surname, even the most literate people varied the spelling of their own names. Variations of the name Axtynd include Acton, Ackton, Akton and others.

Notables of the family at this time include Sir John de Acton, High Sheriff of Herefordshire in 1305; John Acton, MP for Droitwich in 1597; Sir Edward Acton, 1st Baronet (1600-1659), English politician, High Sheriff of Shropshire, a Royalist in the English Civil War; Sir Walter Acton, 2nd Baronet (c 1621-1665), an English landowner and politician who sat in the House of...
Another 62 words (4 lines of text) are included under the topic Early Axtynd Notables in all our PDF Extended History products and printed products wherever possible.

Migration of the Axtynd family to Ireland

Some of the Axtynd family moved to Ireland, but this topic is not covered in this excerpt. More information about their life in Ireland is included in all our PDF Extended History products and printed products wherever possible.

Migration of the Axtynd family

Searching for a better life, many English families migrated to British colonies. Unfortunately, the majority of them traveled under extremely harsh conditions: overcrowding on the ships caused the majority of the immigrants to arrive diseased, famished, and destitute from the long journey across the ocean. For those families that arrived safely, modest prosperity was attainable, and many went on to make invaluable contributions to the development of the cultures of the new colonies. Research into the origins of individual families in North America revealed records of the immigration of a number of people bearing the name Axtynd or a variant listed above: Benjamin Acton who settled in Pennsylvania in 1683; James Acton settled in New England in 1718; John Acton settled in Virginia in 1642.