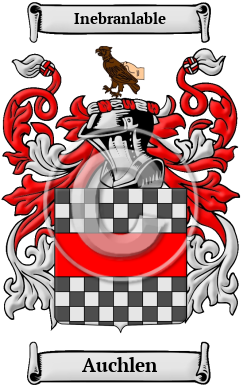 The name Auchlen belongs to the early history of Britain, it's origins lie with the Anglo-Saxons. It is a product of their having lived in or near a prominent grove of oak trees. The name Auchlen literally means oak-land. The branch of the family that originated in Devon is said to have been named for a particular grove near their seat at Acland Barton in Landkey.

Early Origins of the Auchlen family

The surname Auchlen was first found in Devon, where "Acland, which gave name to this ancient family, is now a farm in the parish of Landkey." [2]

"Acland, or rather Aukeland, as taking name from a grove of oaks, for by such an one the house is seated, and hath given name and long habitation to the clarous family of Aclands, which have many ages here flourished in a worshipful degree." [2] Hugh de Accalen is the first recorded ancestor in 1155. The aforementioned farm still exists and is about 3/4 mile north-east of the village of Landkey. "Akland, in Landkey, near Barnstaple, is the first seat of the Acland family, and has been held by them from the twelfth century. The ancient family of Acland for nearly three centuries have made their home in the vicinity of Exeter. Sir John Acland was the builder of the house at Columbjohn, which gave title to the baronetcy at its creation in 1644, and which was garrisoned by its owner for the King. At one time it contained the only Royalist garrison in the county ; but in March, 1646, it was the headquarters of Sir Thomas Fairfax. This mansion has been destroyed, and the present seat of the Aclands is at Killerton, in the same parish of Broad Clyst. Originally built in the year 1788, Killerton was greatly enlarged and improved by its late owner, Sir Thomas Dyke Acland, to whom the distinguished honour was paid of the erection of a statue on Northernhay, Exeter, in his lifetime, ' as a tribute for private worth and public integrity, and in testimony of admiration of a generous heart and open hand, which have been ever ready to protect the weak, to relieve the needy, and to succour the oppressed of whatever party, race, or creed.' The Aclands take their second name of Dyke as representatives of the old Somersetshire family of that name." [1]

Early History of the Auchlen family

Until the dictionary, an invention of only the last few hundred years, the English language lacked any comprehensive system of spelling rules. Consequently, spelling variations in names are frequently found in early Anglo-Saxon and later Anglo-Norman documents. One person's name was often spelled several different ways over a lifetime. The recorded variations of Auchlen include Acland, Aukland, Aclands, Ackland, Acklands and many more.

Notables of the family at this time include John VI Acland (died 1553) who was described as "the first of the (Acland) family to emerge from the shadows of history as a visible human being." Sir John Acland (d. 1613), was the second son of John Acland, of Acland in Landkey, Devonshire. "From his mother he obtained considerable landed property in the neighbourhood of London, and increased his fortune by marrying Elizabeth, the daughter of George Rolle, of Stevenston, in Devon, and the widow of Robert Mallet, of Woolleigh in the same county. " [4] Anthony Acland (died 1626), was an English...
Another 137 words (10 lines of text) are included under the topic Early Auchlen Notables in all our PDF Extended History products and printed products wherever possible.

Migration of the Auchlen family

Thousands of English families boarded ships sailing to the New World in the hope of escaping the unrest found in England at this time. Although the search for opportunity and freedom from persecution abroad took the lives of many because of the cramped conditions and unsanitary nature of the vessels, the opportunity perceived in the growing colonies of North America beckoned. Many of the settlers who survived the journey went on to make important contributions to the transplanted cultures of their adopted countries. The Auchlen were among these contributors, for they have been located in early North American records: George and Mary Ackland who settled in Virginia in 1623; Mary Ackland settled in the same state 1638; Thomas Ackland settled in Somers Island in 1662.