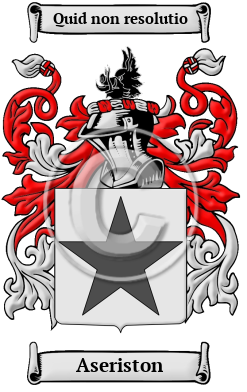 The lineage of the name Aseriston begins with the Anglo-Saxon tribes in Britain. It is a result of when they lived in the village of Ashton, Lancashire. The first part of the name, Ash, was originally given to a person who resided in an area where ash trees prospered. There are eighteen parishes and townships called Ashton in numerous counties and there are also various minor localities of this same name.

Early Origins of the Aseriston family

The surname Aseriston was first found in Lancashire, where they held a family seat originally at Assheton, originally known as Assheton-under-Lyne. [1]

Early History of the Aseriston family

Migration of the Aseriston family

To escape the unstable social climate in England of this time, many families boarded ships for the New World with the hope of finding land, opportunity, and greater religious and political freedom. Although the voyages were expensive, crowded, and difficult, those families that arrived often found greater opportunities and freedoms than they could have experienced at home. Many of those families went on to make significant contributions to the rapidly developing colonies in which they settled. Early North American records indicate many people bearing the name Aseriston were among those contributors: Alice Ashton, who sailed to Virginia in 1635. John Ashton arrived in Virginia in 1720; James Ashton sailed to Philadelphia in 1816; and Evan Ashton journeyed to San Francisco in 1852..